Q:  "I just received an auction catalog and noticed a lot of baseball cards from the 1930s I have never seen before. In 1935, the Schutter-Johnson Candy Company put out a series of cards called "Major League Secrets". This 50 card set had unique drawings illustrating baseball tips by famous ballplayers such as Al Simmons, Lou Gehrig, Babe Ruth, Ki-Ki Cuyler, etc. I am interested in collecting these cards. Can you tell me any history you know about these cards and where I can obtain them?" 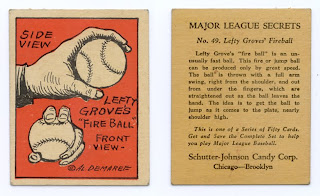 (image used from this site showing many images of Lefty Grove cards)
A:  I think you're referring to the R332 set. As you can see on the back, Schutter-Johnson was a candy comapny headquartered in Chicago, with another office in Brooklyn. Among the company's best-known products was Bit-O-Honey, which was introduced in 1924 and is still being sold today (though Nestle owns the name now). The cards feature a drawing by former major league player-turned artist Al Demaree, with a bright red background behind the artwork and some written comments added. Like other candy companies that made cards during the 1930s, Schutter-Johnson issued sets related to other subjects as well, including Tarzan and a set of occupations called "I'm Going to Be..."

The cards are fairly scarce but not impossible. Schutter-Johnson was a smaller company and some collectors have historically ignored cards that feature drawings (as opposed to more detailed paintings, like Goudey used). Although supply is quite limited, there is limited demand as well.

Here's a link to a set description on "Old Cardboard"'s website. That'll give you just about all the info on the set I can find.
Posted by Chris Stufflestreet at 8:30 AM