There are several cards in my collection that have stories to tell. Here's one of them that I picked up while still in high school: 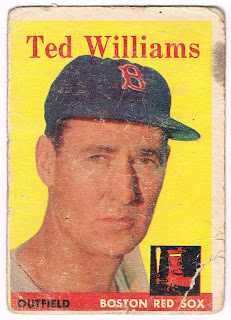 It was Summer 1989. Those who were part of the hobby then remember the way card shows popped up everywhere then. Even in small towns like the one I called home, there seemed to be at least one show within driving distance every weekend. In northern New York, I sometimes got to travel across the border and roam the tables in Ontario, Canada. For this show in '89, I went to an armory in Kingston, Ontario.

There are a few things I remember noticing from that show. First, for a kid who only lived 30 minutes from the border, listened to their radio stations and even picked up their TV stations, I was struck by how different everything was. The armory had a Canadian Army recruiter set up at a table, who was dressed differently from the U.S. Army sergeant I had been talking with at the time yet still said many of the same things. The stores had different names, all the signs and products were written in two languages, even the soda cans were made differently. The second thing I noticed was how many more O-Pee-Chee cards were available there. While I did understand that OPC was a Canadian card company, we didn't really see many of them just 30 miles south.You'd think more of them would have filtered their way across the border.

At one table, I saw this 1958 Topps card of Ted Williams. While it wasn't much condition-wise, what stopped me was the price tag: $7.50 Canadian, what was then the equivalent of about $5 in U.S. currency. The chance to grab a card from Teddy Ballgame's playing days was really tempting, but at the time I was still using the First National Bank of Mom and my purchases needed to be cleared through her. As she looked at the card, her first reaction was, "that's a really beat-up card for that much money."

The seller seized the opportunity. "Actually, Ma'am...if it were in top condition, it would be worth $375." He had watched me look through his cards. He saw the way I flipped through stuff but stopped at that Williams card and considered it for a while. Perhaps he'd used the technique before, but it made Mom do a double-take and pull out the money.

Twenty-one years later, it's still a part of my collection, even as I've upgraded several of the worse cards from my 1958 Topps set-in-progress. I don't know if it's because I've been unable to find a reasonably-priced Williams or if it's because the one I have is a reminder of a long-lost era. As the first card in my 1958 binder, it immediately takes me back to myself at 16 and a time where I could visit card shows all the time.
Posted by Chris Stufflestreet at 8:30 AM