Sometimes, you see a card that just doesn't look right. While sometimes the problems can be attributed to the games that youngsters have played with their cards or on torture lovingly inflicted by their previous owners, sometimes the blame needs to be placed on the card maker itself. Take this card from 1971 Topps: 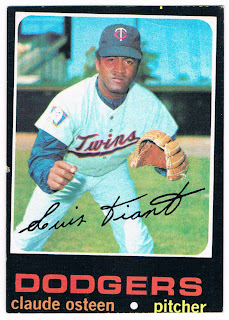 In the case of this Luis Tiant card, there are a lot of things going on here. It's miscut, identifies another player entirely, exhibits a little of the border chipping that really frustrates collectors of the 1971 Topps set and is diamond-cut to boot. It looks like the printing sheet was loaded into the cutter upside down, creating unique versions of this Tiant card and the other 131 cards joining him. Undetected by Topps' QA inspectors, the card was placed in a wax wrapper and sent out for a collector to pull out and say, "Aargh!"

While some collectors see this card as absolutely useless (the card number on the back is Osteen's), I say it shows that even a machine designed for high-efficiency mass production will get it wrong sometime.
Posted by Chris Stufflestreet at 8:30 PM