After spending many seasons as a perennial cellar-dweller in the American League, the St. Louis Browns moved to Baltimore for 1954 and became the new version of the Baltimore Orioles. This move led to a small crisis on the part of the two major baseball card companies. They needed to produce cards showing Baltimore Orioles but most of the players were pictured as St. Louis Browns. To complicate matters, an Orioles uniform wasn't necessarily available. So, what does a card company do when faced with the problem of getting cards out to eager young customers in time for baseball season?

Here's what you do...You make something up. It's been my experience at work that when the boss says he needs something "NOW" there really isn't a lot of time for explaining things like the fact that somebody else hadn't delivered what you need. It wasn't any different back in the 1950s. You just get it done and hope it doesn't come back to bite you in the rear.

Bowman's cards featured airbrushed caps. With the rough idea of the new logo provided from the team, the artists imagined what the new team's logo would look like. 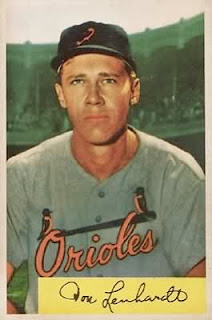 Don Lenhardt's cap shows the oriole more upright but facing to the right. The Orioles shirt logo is an obvious airbrush job as well. 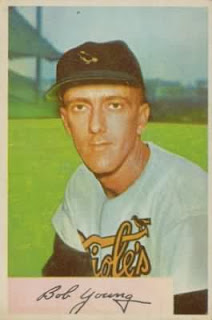 For Bob Young's card, the oriole is facing to the right (and the shirt logo appears to have an apostrophe in it as well). Again, the bird is standing more upright than the actual Orioles logo. Topps used a more correct logo when they airbrushed Young's card for their set: 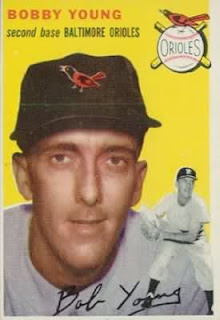 Sometimes, they just didn't bother changing the logo at all. One of the early Oriole cards in the set featured Johnny Lipon. This card is likely to confuse collectors because it shows Lipon as a Red Sox player, identifies him as an Oriole on the front and a White Sox player on the back. 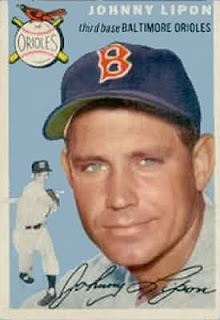 However, a blown up picture of his smaller photo shows up something interesting:

Despite not changing the logo on Lipon's old Red Sox cap, they changed the one in the smaller photo to look like the logo seen at the top of the card:

Since the smaller picture was likely too small to see any detail with the naked eye (indeed, I didn't even notice this until I saw it magnified), perhaps this was Topps' way of getting an Orioles card into the early series of 1954 cards.

For the record, Johnny Lipon never played with Baltimore. Acquired by the St. Louis Browns at the end of the 1953 season, he played seven games for them. During the offseason, he was traded to the White Sox (which is noted on the back of his card). On April 18, 1954 he was traded to Cincinnati, who released him less than two weeks later without giving him any playing time. Those games with the Browns in '53 would be Lipon's last in the big leagues.
Posted by Chris Stufflestreet at 8:30 AM