Last week I  featured a Q&A about cards that were sometimes found cut apart due to their design. This time around, I'd like to spotlight a set among those occasionally found that way. The text comes largely from this page about the set, which isn't technically "borrowed" since I wrote the text on that site, too. However, instead of the picture used on that site, I'll show a couple of cards from my collection here.

One of three national baseball card sets issued during 1941, before World War Two halted most baseball card production for several years, the 1941 Double Play set was unusual in that its cards featured two players instead of one. The cards were produced by Gum Products, Inc.of Massachusetts, which was a different company than Philadelphia-based Gum, Inc; however, the similarity in names has caused confusion in the hobby. 150 player pictures (but only 110 different players) are represented on 75 panels.

The full cards measure 2 1/2" by 3 1/8". Fronts feature sepia-toned black and white photos of two different players from the same team, against a white background that also serves as the border. Below each picture is a short biography and statistical information, as well as the card number (each player has his own individual number). The cards are blank-backed. 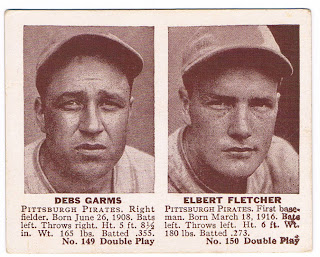 Cards 149-150, the final ones of the set.
Most cards are arranged horizontally, like the example card featured above. Cards numbered 81 through 100 feature action shots of the players and are vertically oriented, appearing tall and thin. All players featured in action photos are also found with portrait cards. An example of this is shown below: 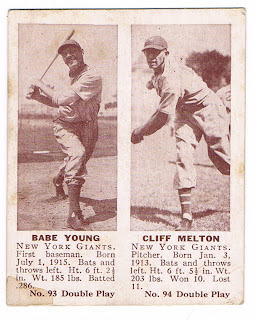 Cards 93-94, featuring a couple of Giants.
Most of the stars of the era can be found in this set, but there are quite a few lesser-known players featured as well. Since production of baseball cards was essentially halted through the Second World War, a large number of major leaguers never had the chance to appear on a baseball card; some who played just before the war managed to get on one card, which can be found in this set. A lot of team collectors focus on this issue as a result. Also noteworthy here is a rookie-year card of Pee Wee Reese.

One of the most important things to point out to potential collectors of these cards: although these cards are designed to look like there are two separate cards, there was no perforation provided to separate them. If the two cards are cut apart, their value is greatly diminished. Several cut specimens are auctioned and sold with a note that it was "common" for the cards to be cut apart. Whether or not that is true, no card in this set is considered complete unless intact. That said, for many collectors, cards that have been clipped offer a great way to collect the set inexpensively until entire cards can be found.
Posted by Chris Stufflestreet at 8:30 AM