Between this blog, my website and my other hobby endeavors, I get asked a lot of questions. Some of the questions are good enough to find their way here as my weekly Q&A post. Sometimes, a simple question can change what we've know in this hobby for years.

"I wonder if you might know about any variations in the 1965 Topps hot iron transfers. I have two versions of Ron Hunt's transfer. One lists his position as shortstop which is clearly wrong since he rarely played at that position (3 innings of 2 games in his career). I assume his version was created in error and soon replaced with the corrected second base version.

None of the checklists of these transfers that I have seen show this variation. Do you know any other variations in the set?"

He included a scan of his cards, which was incredibly helpful: 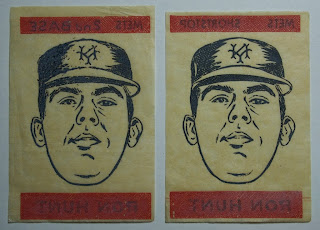 (Due to the crude nature of the artwork, the image above may not illustrate the difference. However, clicking on the image will open up a larger image in a new window.)

Upon reading this question, I pulled out my SCD "Big Book" and sure enough, only one Ron Hunt card was shown there. I fired off an email to the editor of that book, Bob Lemke, who responded that he'd never been aware about any variations in the set. I don't have any contacts over at Beckett right now, but even their book didn't list anything other than the one Hunt item in its own catalog. Two other hobby guys whose opinion I respect immensely -- Joshua Levine and David Hornish -- also replied that they've never seen that.

The Topps Transfers were the second insert set included with wax and cello packages in 1965.  The first two series included Embossed cards, and the Transfers showed up afterward. They were designed to be ironed on to shirts, pants, jackets or any other type of cloth imaginable. The excellent Topps Archives Blog will give more info about the set.

My guess is that -- since the Transfers appeared over three series -- when the error was discovered, it was quietly corrected in a later series. Since this is a new discovery, it is not yet known whether the error or corrected version is scarcer. For the time being, both versions are considered commons until the market determines otherwise. The Transfers haven't been a widely collected "oddball" set -- the supply is relatively low but so is the demand -- so there may not be much of a run on the cards except by those collectors who now realize their set isn't quite complete now.

As for the part of the question about other variations...I have no idea. Dave Hornish, the collector behind The Topps Archive Blog, says, "Some transfers look very crude when compared to others and I wonder if other variations exist, especially in lettering and even drawing." Perhaps this new discovery will cause collectors to look a little closely to their examples and see if there might be some others to be found.

But a variation out there and undetected for 45 years -- on a Topps insert set, no less -- is amazing.
Posted by Chris Stufflestreet at 7:36 AM