While flipping through my 1966 Topps binder, I saw something interesting. Here are two players who contributed to the Minnesota Twins' pennant run the previous season: 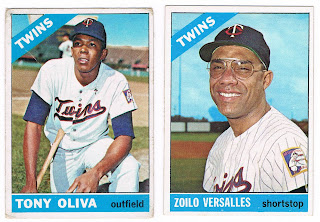 Both were important to the '65 Twins, but how important? One of these guys ended up winning the '65 American League MVP award. Versalles was given the all-important card #400, and the back mentioned the award: 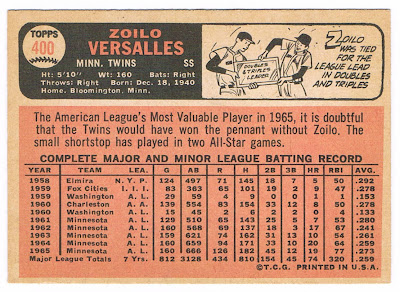 The speedy Cuban has been largely forgotten today, but Versalles was third in stolen bases that year to go along with the doubles and triples lead mentioned on the card. In fact, 1965 was the third straight year he led the league in triples. Additionally, Versalles led in runs scored, total bases, at bats and plate appearances. 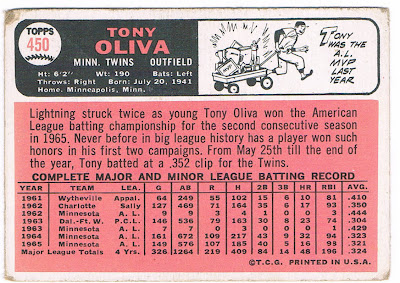 Oliva's cartoon also gives him the credit for the MVP award. The 1964 A.L. Rookie of the Year, he followed up with a superb sophomore season, leading the league in both batting average and hits. While Versalles's position as the Twins' leadoff hitter in '65 helped him get all those plate appearances, Oliva (who batted third) was obviously helpful in getting him home.

When the MVP ballots were cast for 1965, all the first-place votes went to either Versalles or Oliva. Versalles was named first on 19 or the 20 votes and was the actual winner of the award. Oliva was a distant second.  Both players had exceptional seasons, but you'd think Topps would have had a proofreader check the facts before they were sent out for kids to write back and correct.
Posted by Chris Stufflestreet at 11:05 AM

Email ThisBlogThis!Share to TwitterShare to FacebookShare to Pinterest
Labels: 1966 Topps