In 1970, the move of the Seattle Pilots to Milwaukee happened too late for the card company, leaving Topps with a whole year of Pilots cards and no Brewers. Determined not to let that happen again, Topps was ready for the Padres' reported move away from San Diego in 1974. So even though Ray Kroc came along and saved them, the first couple of series came out with cards that listed Willie McCovey and company as "Washington Nat'l League." 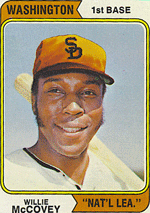 They also put out corrected versions once it was confirmed the team was going to remain in San Diego. 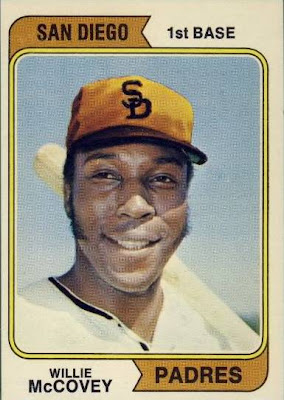 Though they found it necessary to change the team designation, apparently Topps was satisfied with the airbrush art on McCovey's cap.

The thing that always puzzled me about the 1974 Topps set was that it was supposedly issued all at once (unlike the Topps sets from 1952-'73, which were issued in six or seven series throughout the season).

However, the San Diego players erroneously listed as "Washington Nat'l L." were all found on cards #387 and below. Willie McCovey -- as seen above -- is found with both variations, as are Cito Gaston, Randy Jones and Glenn Beckert (still shown in his Cubs threads on the card), as well as the team card. However, all the Padres cards after #387 are shown only as Padres...including Dave Winfield on his rookie card. If the cards were all printed and issued at one time, the Padres should have all had Washington variations.

Speaking of Rookie cards, the only card that breaks the rule about no Padres variations after #387 will be found on #599.  It was a card featuring four rookie pitchers, including Padre Dave Freisleben. That card ended up with three variations...Washington and two different fonts for San Diego. Unlike the other "Washington" cards, #599 is most commonly found with the "Washington" designation.

Also, the Padres were one of four teams in the 1974 Topps set with no manager/coaches card. That's probably because Don Zimmer had been dismissed and Topps was unable to get a new photo of new skipper John McNamara in time for the set. All three of the other teams missing manager cards had also dismissed their field generals before the '74 season: Detroit, Oakland and the New York Yankees.
Posted by Chris Stufflestreet at 8:30 AM