The player sliding into third base in the center panel of the card is a man who changed the way that baseball was played. He was also a complex individual, shaped as much by geography as the times he lived in. Before he died, he told his story to a young writer named Al Stump. However, Stump wrote the rest of the story later: 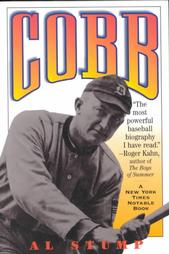 Those who've seen the movie (with Tommy Lee Jones as the "Georgia Peach") are already familiar with the story of how Cobb wrote his autobiography with a young writer late in his life. In this book, Stump goes back to the notes he took in 1960 and tells a more complete tale of Tyrus R. Cobb than the one his publishers let him give the first time around.

Many of our sports heroes turn out to be bad role models. That was as true a century ago as it is today. Babe Ruth was legendary for chasing women and was rumored to have several venereal diseases. Near the end of his life, Mickey Mantle regretted that he wasted time drinking and carousing. Darryl Strawberry and Dwight Gooden destroyed promising futures because of drug addiction. Pete Rose's story is still being played out, but it seems safe to say that he wasted what should have been a certain place in baseball immortality. For every Lou Gehrig, Christy Mathewson or Cal Ripken -- men who lived by example -- there are several guys like Bo Belinsky or Ty Cobb.

Ty Cobb was driven to succeed. To borrow a couple of cliches, he was his own worst critic...and his own worst enemy. Like many great players, he constantly looked for ways to make himself better. Cobb drove himself to win eleven batting titles in thirteen seasons (he was runner-up both of those other years), to finish with more hits, more stolen bases and more times on base than any other player before him. Nothing pleased Cobb more than winning, but nothing burned him worse than losing. His fiery nature and aggressive playing style gained him respect; however, those same things made him feared and hated.

Stump gives a lengthy account of Cobb's life, career and battles with the Detroit front office. He goes into great detail about the way baseball was played while Cobb learned it. He tells about Cobb's upbringing and family, tries to explain his relationship with his father, the hard facts about his father's death at the hands of his mother and the small-town innuendo that followed the tragedy. Cobb's successful business dealings and less successful marriages are also laid out for the reader.

Most of all, Stump tries to explain who Cobb was, how he saw himself and how he played the game. Cobb personified baseball's "dead ball" era and was an innovative tactician unwilling to adapt when a livelier ball changed the way the game was played. Stump tells of Cobb's friendships with Tris Speaker and Christy Mathewson, his "feud" with Babe Ruth and often-sour relationships with his teammates.

"Cobb" will be a fascinating read for a baseball fan or anybody who'd like to understand how the game has changed. It sometimes paints a disturbing picture of the man, but does its best to paint the full picture.

Email ThisBlogThis!Share to TwitterShare to FacebookShare to Pinterest
Labels: book