A Word About Condition

One of the best things about having a blog and a hobby-based Web site is being able to help out other collectors. I enjoy getting email from somebody who has a card, but can't find any information about it. Recently, I have been able to identify 1961 Fleer, 1950-56 Callahan and 1939 Goudey premiums to collectors who were unable to figure out what they had.

On the other end of the spectrum are the more numerous emails from visitors who ask, "I have a 1954 Yogi Berra card. What is it worth?" or "I just found a Ray Sadecki Topps card. Could you give me a ballpark value on it?" Since I don't place values on my site and don't subscribe to any price guides, I'm not highly qualified to appraise anybody's cards; however, this type of email doesn't give me all the information I need to make an accurate guess in the first place.

There are a number of things that affect a card's value. The first and foremost is its condition. Common sense would indicate that a card with no flaws is desirable over one that has a crease or a bumped corner, but some collectors don't bother to read the condition guide found in all major price guides. It's safe to say that if your cards look like this: 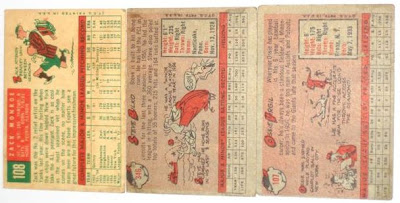 They aren't always going to fetch the prices that appear in the price guides.

One of the reasons vintage cards are so valuable today is because there are few that can be found in top condition (which is how they are valued in Beckett or the now-defunct Tuff Stuff). Once upon a time, kids pulled cards out of gum packs and tortured them to death. Cards were stored in back pockets, wrapped with rubber bands and tossed into shoeboxes, or were subjected to bicycle spokes and card-flipping contests, and many of those cards were roughed up. Over the past 30 years, however, more mature collectors have stored away new cards to protect against damage, and cards from 1980 or so are more likely to be found in higher grade.

That's not to suggest that condition has only been important since around 1980. In 1939, Jefferson Burdick issued the first comprehensive guide to collectible cards, which we now know as the American Card Catalog. The ACC was more than a guide for baseball card collectors; in fact, cards of all subjects were listed, from baseball players to cards of birds, actors and flags.

On the subject of condition, Burdick wrote the following:

"Condition must be considered in pricing cards. Many are found with creases, tears, stains, tack holes, and other defacings to such an extent that they are almost valueless. The prices in this catalog are for specimens in good to perfect condition. As in all collecting, this is often a matter of personal opinion. Consequently, most collectors insist on seeing before valuing unless they are quite familiar with the seller's opinions on this point."

Remember, at that time, there were no dealers, card shops or monthly price guides. Serious collectors did most of their business through the U.S. mail and rarely met their fellow collectors in person. In that environment, trust was a key factor.

By 1983, Burdicks's concise wording had become somewhat skewed as the values grew with the hobby. Here's how a hobby guide from that era tackles the subject of grading:

"Each hobby has its own grading terminology...sports cards are no exception. The one invariable criterion for determining the value of a card is its condition: the better the condition of the card, the more valuable it is. However, condition grading is very subjective. Individual card dealers and collectors differ in the strictness of their grading, but the stated condition of a card should be determined without regard to whether it is being bought or sold.

Somewhere along the way, some enterprising collector thought of making a grading standard. A third-party group could examine the card and determine its condition, and then place the card in a protective holder to keep that condition. By doing that, buyers and sellers no longer had to disagree over a card's condition (especially for cards where the difference in price between EX and NrMT could mean fifty dollars or more).  The idea caught on, and professionally-graded card services like PSA and SCG became established in the hobby.

Today's guides have a much more thorough definition of condition. One element that has become a large factor has been centering. When I began to follow the hobby in the 1980s, centering was mentioned only in regards to miscut or poorly cut cards. Today, Beckett specifies that a card must have no worse than 45/55 centering to qualify as Mint. As a result, you will notice that the card dealers who have been selling since the 1970s and 1980s have had a tendency to "overgrade" cards, because the requirements are so much more stringent.

On discussion boards, I have seen a number of collectors who only buy graded cards, and some have mentioned that they no longer buy raw cards because some sellers don't grade well. Personally, I welcome their decision; that means I won't have to compete with them on eBay when I bid on vintage lots. In my collection, the only time condition matters is when I have two cards and have to determine which one goes in the duplicates box.

P.S. In case you were wondering, here are some of the card values from the 1939 guide I mentioned earlier in the article: