Recently, I did a post about the 1948/'49 Bowman set and mentioned how its design was better than Bowman's since it actually named the player on the front. That's true for the '48 Bowman and the first series of '49 Bowman cards, but it appears they noticed what the competition was doing and made a few changes as they added new cards in '49. 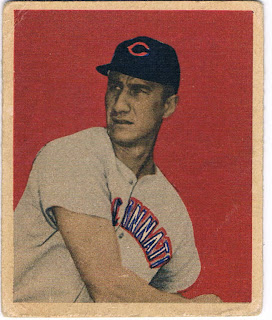 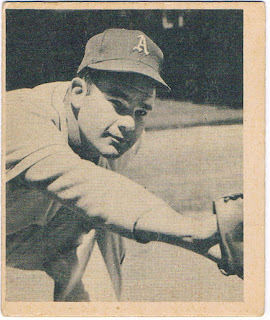 Card #15 -- Eddie Joost
They took a player photo, added color to it and placed a solid color in the background. However, the designers weren't content to simply leave the design alone, not when another company was selling cards as well. So, beginning with card #109, a box was added to the front: 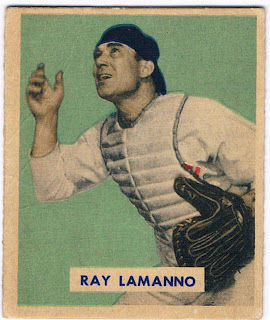 Card #113 -- Ray Lamanno
However, there are a handful of cards from earlier series that were given the new design since they were printed and included in later series. Therefore, they can be found either with or without the name on the front...a complete set checklist on my site tells which ones have that variation.

Bowman also changed the design on the backs in 1949. Here's that back of Sauer's card: 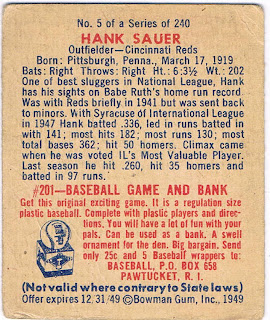 One nice feature Bowman used was the addition of a second ink color (the '48 cards were printed entirely in black). Having the name in red, as well as the send-in offer at the bottom, makes the text stand out better. The back of the Lamanno card shows some differences: 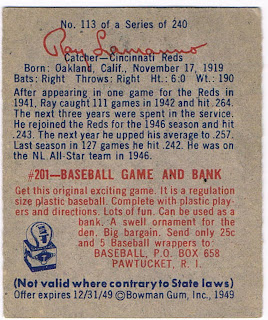 Now, the name is written out in script form, rather than in solid block. Presumably, since the name is in block form on the front in case the kids owning the card hasn't yet learned how to read in cursive, the script gives it a nice flourish. The two backs also show a difference in card stock. Cards 1-3 and 5-73 can be found with either white or gray stock, while the rest of the cards are found in gray only.

As for that last sentence, you might be wondering: why not card #4? When Bowman issued their first card series in 1949, they left card #4 out of that printing. It's been suggested that the intent was to keep kids buying packs to get it, which is underhanded in a way but not nearly as bad as the skip-numbering Leaf did that year. In any case, card #4 would appear later, in the form of Jerry Priddy.
Posted by Chris Stufflestreet at 8:30 AM

Email ThisBlogThis!Share to TwitterShare to FacebookShare to Pinterest
Labels: 1949 Bowman