The Set That Defied Conventions

Although World War Two ended before the 1945 World Series and most of the major leaguers who has been fighting the war were back on the field in '46, it took a couple of years for any national baseball card sets to appear. In 1946 and '47, there were many regional sets issued with loaves of bread, like Sunbeam, Homogenized and Tip Top. The period was a heyday for the Pacific Coast League; sets of its players showed up in loaves of bread (Remar), clothing stores (Smith's Clothing) and gas stations (Signal Oil). By 1948, the wartime restrictions on paper and printing had eased, supplies had built back up and the time had come to start printing baseball cards again for nationwide distribution.
During the 1948 season, Bowman issued a small set of black-and-white cards. Philadelphia Gum Company (better known for its mid-60s football sets) issued "Sports Thrills" cards along with its Swell brand gum, also a black-and-white set. By the end of the season, a new set was issued by the Leaf Company of Chicago (set description and checklist here). There were 98 cards in this new set.
Leaf's timing was unusual, because kids didn't tend to collect baseball cards after the season ended. Late fall is a time for football (in fact, both Leaf and Bowman were issuing football card sets at the same time as the baseball set). The set continued to be sold through the 1949 baseball season; this has led the set to be called "1948 Leaf" or "1949 Leaf," but most (myself included) refer to it as "1948/49 Leaf."
Leaf's was the first national baseball card set after the second World War to include color, by using black-and-white pictures and adding color by machine. The result isn't high-quality, however. The color on some cards is poorly done. Players' hats have too much color, their faces don't always match where the features are painted in, and many of the cards just look blurry. Likewise, the cards are printed on lesser-quality paper and cardboard, which makes collecting a high-grade set tough.
Cards have a couple of different background styles. This is found with a solid color background: 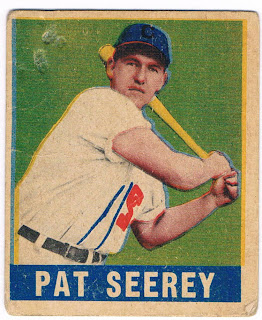 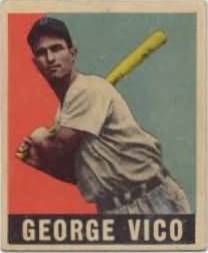 Card #47 -- George Vico
There are a few cards that can be found with variations on their back colors, due to the haphazard print process Leaf used.

The 1948-49 Leaf set has been confounding collectors since the days they could still be purchased in gum packs. Despite the fact that the cards were issued at an unusual time, they were skip-numbered as well. The card numbers run between 1 and 168, and some card backs advertised an album that would hold 168 cards.  Adding to the frustration was the fact that exactly half of the 98 cards were severely short-printed. This was most likely designed to cause kids to spend a lot more pennies to get the non-existent cards. By the time the hobby was developing in the 1960s and 70s, collectors were still looking to find out whether Leaf had issued any more cards than 98.

Here's one of those second-series cards: 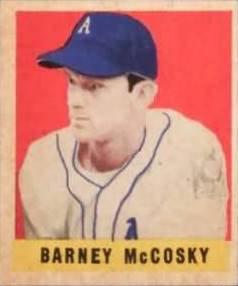 Card #63 -- Barney McCosky
For all its faults and shortcomings, the Leaf set had some things that Bowman didn't. Leaf actually had players' names on the front of its cards; Bowman copied the idea and added names to the cards in later series of its own 1949 set. Leaf also had cards of Ted Williams and Jackie Robinson, as well as Joe DiMaggio (who never appeared on a Bowman card at all). Babe Ruth has a card as well, probably as a tribute to him after his death in August, 1948. Another old-timer was then-coach of the Pirates, John (Honus) Wagner: 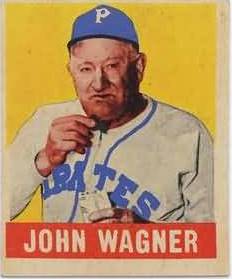 Card #70 -- John (Honus) Wagner
The Wagner card is one that I like to show off because it raises a great question. Wagner is famous even to non-collectors as the subject of the most valuable baseball card in existence, and the story behind why that T206 card was limited is legendary. The legend states that Honus Wagner was anti-tobacco and didn't want the kids of America thinking he was endorsing cigarettes, so he had his card pulled from the set. I heard that story several times as a kid, but one day I saw his card from the Leaf set. It shows Wagner with a mouth full of chewing tobacco, which led me to the belief that Wagner wasn't as sensitive about kids' morals as he was about getting paid.
There are a couple of variations found in the Leaf set.  Most copies of card #102 show Gene Hermanski of the Brooklyn Dodgers, while a few spell his name as "Hermansk." Card #136 of Cliff Aberson shows the shortcomings of the machine-added coloring process. Most of Aberson's cards show him with a blue sleeve that is painted halfway down his arm: 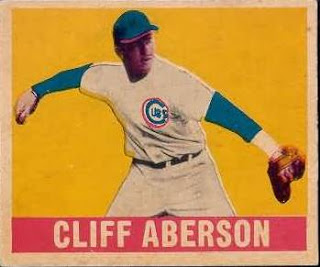 Card #139 -- Cliff Aberson (long sleeve)
The last card of the set misspelled Phil Cavarretta's name as "Cavaretta," but this mistake was never corrected.
Inaccuracies can also be found on the backs of many players' cards. The card backs in the Leaf set follow a similar format of the 1948 and 1949 Bowman sets (which themselves were modeled after the backs of 1939-41 Play Ball cards). Along with a card number, the advertisement and the player's vital information (height, weight, etc.) was a paragraph outlining career highlights. The back of Ted Williams's card gave his age as 31, despite his being 30 until late in the '49 season and lists him as a right fielder instead of the left field position he actually played. Any inaccurate statements on the backs are made up by the sense of humor that comes from the writer. Phil Rizzuto's card states that he's "not much of a hitter," which was true; however, statements like that one just don't show up on cards today.
The short-printed cards make this one of the toughest postwar sets to complete, and few collectors even try to start on it. The high cost per card (especially for the short prints) are quite prohibitive for the budgets of some collectors. In terms of scarcity, the short prints in the 1948-49 Leaf set are almost as tough as much tougher than 1952 Topps high numbers. Short prints include the rookie cards of Hall of Famers Satchell Paige and Larry Doby, as well as key cards of Bob Feller, Hal Newhouser, George Kell and Enos Slaughter. Thanks to the skip-numbering and the fact that the short-prints aren't consecutively numbered, a collector almost needs a detailed checklist to determine which cards are scarce.
For the record, here are the short prints: 5, 8, 13, 19, 20, 30, 33, 36, 43, 45, 48, 51, 54, 55, 62, 63, 66, 68, 75, 78, 81, 85, 88, 93, 98, 104, 108, 113, 120, 121, 123, 127, 129, 131, 133, 137, 138, 142, 143, 144, 146, 149, 153, 158, 160, 161, 163, 165, 168.
One of the web sites I often recommend to visitors of my Vintage Baseball Cards site is the Virtual card Collection, where cards for dozens of sets are featured. If you are interested in seeing the cards of the 1948-49 set, images of most can be found here. The print registration problems really show up on some of the cards there.

(Edited to add: a hobby buddy of mine has informed me that what I said about the scarcity of the SPs is erroneous. A little more dialogue with other collectors has confirmed it. I've fixed it and will explain the discussion in a future post.)
Posted by Chris Stufflestreet at 8:30 AM

Email ThisBlogThis!Share to TwitterShare to FacebookShare to Pinterest
Labels: 1948 Leaf