On Monday, I explained a little bit of detail about the 1948/'49 Leaf set and was quickly corrected on this point:

A buddy of mine named Ken let me know that it was his observation -- gleaned over 35 years of attending shows and trading with others -- that they short prints were much tougher than '52 Topps high numbers. So, I asked a bunch of other hobby friends what they thought. Almost everybody who responded agreed with Ken's assessment.

The issue isn't so much whether they're expensive as how hard they are to find. At major card shows, '52 Topps high numbers can be found easily if your pockets are deep enough. At the same time, collectors of Leaf cards must be more patient. They're just not there. In the major auction houses, there are almost always lots featuring high number '52 Topps cards, but that's not always the case with Leaf SPs.

In my own collection, I have two '52 Hi numbers, including this one I showed here last year: 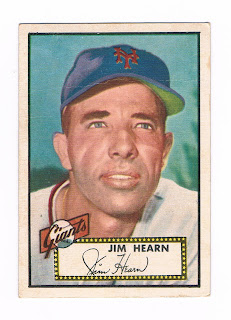 Yes, it looks great. However, I picked it up cheaply because the back has major paper loss, so the number wasn't visible.

However, I have zero Leaf SPs. While that would lend credence to Ken's argument, I should also say I've never been crazy enough to try and chase Leaf SPs due to their prohibitive cost and none have somehow managed to find their way inside despite that.

Unlike others, I'm definitely willing to admit when I've been wrong (just don't tell my wife. Seriously.). After all, this blog is devoted to informing hobbyists about older cards and I want it to be as accurate as I can make it.
Posted by Chris Stufflestreet at 8:30 AM

Email ThisBlogThis!Share to TwitterShare to FacebookShare to Pinterest
Labels: 1948 Leaf