The New York Yankees have retired a bunch of uniform numbers, and #1 was for Billy Martin. He also wore the number while he played and managed elsewhere. In this 1972 Topps card, Martin is shown as the manager of the Detroit Tigers: 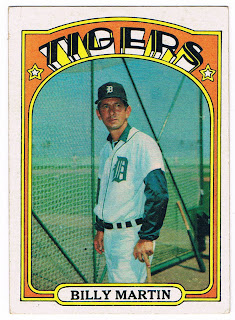 Card #33 -- Billy Martin
Billy seemed to really enjoy his uniform number. Looking at the way he's holding the knob of the bat, it appears he's showing the photographer that he's #1 in his heart as well: 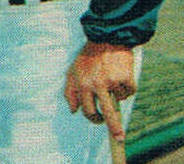 I read somewhere in an interview that Martin said he just posed for the picture naturally and nobody realized until much later about the finger. However, he seemed to always have an excuse ready whenever trouble arose (and it did fairly often), so we'll never know for sure now that he's no longer around to talk about it.

But that isn't the only Billy Martin card in the '72 Topps set. He's the only manager to have his own "In Action" card that year. A manager in action is going to be a limited range of events: signaling to a batter, calling in a reliever, talking with a player on the bench... 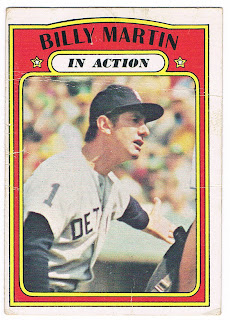 Card #34 -- Billy Martin In Action
Or...having a friendly discussion about the nuances of the rules with an umpire. Personally, I'd rather see the picture show Billy kicking dirt. I also wish they could have fit an Earl Weaver In Action card in the set as well.

And look, you see the Number 1 on this card, too.
Posted by Chris Stufflestreet at 8:30 AM