Here's an email I received through my Website:
Q:
"Was Andy Pafko such a great ballplayer?  He's not in the Hall of Fame, so why is his 1952 Topps card so expensive?" 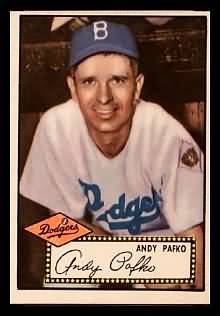 A:
Pafko was a capable fielder and dependable outfielder who played in the National League between 1943 and 1959. He was a five-time All-Star (1945, 47-50) and a lifetime .285 hitter. He came up to the majors and excelled at a time when many of the game's stars were serving in the military, but unlike many 4-F players of that era, he was good enough to stay in the majors once the stars returned from wartime duty. His career numbers aren't particularly impressive, and he has absolutely no chance of induction into the Hall of Fame. Cubs fans will point out that Pafko was one of the guys that took to the diamond the last time the Cubbies appeared in the World Series (in 1945). While the Cubs never returned to the Fall Classic, Pafko did three times -- with the Brooklyn Dodgers in '52 and in back-to-back seasons with the Milwaukee Braves ('57-'58).
The reason Pafko's '52 Topps card is so valuable is because of its position as the #1 card in the set. Back in the days before price guides and professional grading, most collectors really didn't pay attention to taking care of their cards. Many set builders would simply wrap their collections with a rubber band or two, and whatever card was at the top of the stack would get the most damage (the card at the bottom of the stack received most of its damage on the card back, so the damage wasn't as severe). Invariably, the card at the top was most likely card #1 of the set.
Another factor that affects the price of Pafko's card is the Brooklyn Dodgers logo. Collectors of 1948-57 baseball cards generally accept a higher price tag on player cards for all three New York City teams of the era, because those three teams (but especially the Yankees and Dodgers). In the realm of 1950s baseball cards, players like Charlie Silvera, Billy Cox and Clint Hartung have slightly higher card values simply because they played on New York City teams.
In terms of availability, Pafko's 1952 Topps card isn't any scarcer than any other card the the first series. Like all cards numbered 1-80 in the 1952 set, it can be found with either a black or red back. Its high price is not a result of scarcity.
The Pafko card isn't scarce; it's simply hard to find in top condition. It's commonly found with edge and corner wear, and if you don't have a problem with card condition, it won't cost you all that much to get.You just may have to be patient to find it at the right price, however.
Posted by Chris Stufflestreet at 8:30 AM