In Honor of Today...

Today is April 20, which we show as 4/20. In some circles, that number has a significance that goes far beyond what gets covered in this blog. I'm only mentioning this in case it sends extra hits to the blog from search engines.

(I suppose pictures of hot Russian women would help the hit rate, but I haven't found any that have shown up on a vintage baseball card. But I digress...)

In honor of the day, here's a card I recently received from the 1934-'36 Diamond Stars set that looks to be "smoked out": 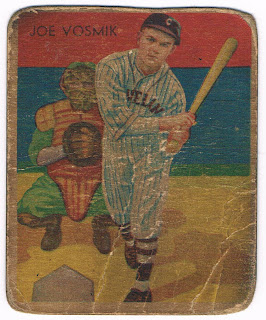 Card #8 -- Joe Vosmik, Cleveland Indians
While the actual year of issue for particular Diamond Stars can often be identified by the color of ink used on the back, that's a little bit tough in this instance: 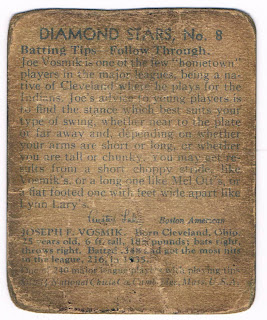 It's hard to tell whether this card has blue or green ink, but fortunately, it mentions in the stat line that Vosmik led the league in hits in 1935 (Clicking on the picture allows you to read it a little better). Therefore, we know it is a 1936 card.

The card is actually not smoky. It appears to have been dipped in paraffin, which some kids used to give an advantage for flipping against a wall. The substance may have allowed the card to get more distance, but it sure didn't protect the poor thing's corners when it was tossed.

That said, I'm not picky about condition when I can cross a 75 year-old card off my wantlist.
Posted by Chris Stufflestreet at 11:15 AM