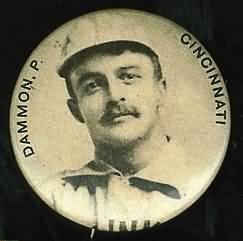 (Not mine...borrowed scan)
This is a Cameo Pepsin pin from 1898. It's a nice example, too; many of them are found with faded images. Like many 1800s items that featured baseball players, they were but a small part of what was available on the pins.

As far as I can tell, pepsin was a flavor, similar to what we now know as spearmint or peppermint. The timelines I've seen really don't explain it all that well. It's part of the Pepsodent name, and a bottler made a drink out of it...you may have heard of Pepsi? I doubt there's still pepsin in Pepsi, though, and widespread use seems to have died down around the Great Depression. 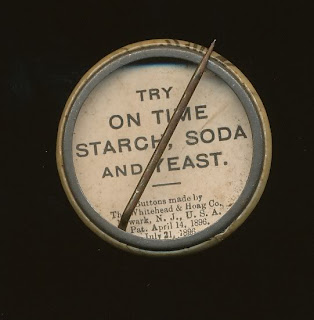 The slogan on the back is on a paper insert.

By the way...the "P" after Dammon's name is actually his position, not his first initial.

Not a whole lot of info to share, but it's a neat little 19th Century item that doesn't pop up that often.
Posted by Chris Stufflestreet at 8:30 AM