In keeping with the 1954 Bowman theme from my last post...these cards were added to my collection last week. They were sent from another member of an online group that I belong to, and were sent specifically to fill in some holes in my binder. Since I happen to feel that a hole in the card is better than one in the binder, they're welcome. 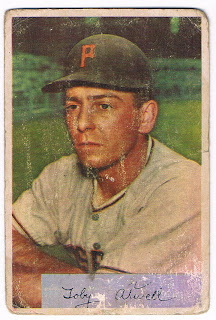 Card #123 -- Toby Atwell, Pittsburgh Pirates
Toby Atwell played in five seaons, and four of those were in Pittsburgh. He bookended his time with the Pirates with stints in Wrigley and Milwaukee. He was part of the trade that sent Ralph Kiner to the Cubs. While never a regular beyond his rookie season, his major league service from 1952-'56 placed him in several widely-collected baseball sets.

In another one of those "Everybody Has a Record" stories (a tip of the ol' ballcap to Matt over at Heartbreaking Cards), he and Jerry Lynch teamed up for back-to-back home runs twice in a single game in 1954. They weren't the first to do that, but it's never been done three times.

Toby Atwell went back to his native Virginia after he retired, and died there in 2003.

Card #31 -- Forrest "Smoky" Burgess
Smoky Burgess was also a catcher. While he's better known as one of the best pinch-hitters of his time (and later in his career, when the batting eye normally loses focus), Burgess was another person cheated by circumstance in Harvey Haddix's blown perfect game in 1959. Had Don Hoak not muffed a fielding play at third (and Haddix been able to retire two more batters...and the Pirates actually scored), he could have been the catcher who directed the longest perfect game in history. That's a lot of "if"s, but no pitcher has ever managed to be perfect for that long.

Sadly, Burgess has also gone on to the Field of Dreams. He passed away in 1991.
Posted by Chris Stufflestreet at 8:30 AM