While looking through my binder and finding ideas for my posts here, it occurred to me that my readers would like to get a better education on certain card sets from the past. Yes, the 1952 Topps set is classic, but with Topps using that design on new cards seemingly every year and shoving them down the throats of collectors, we know what they look like by now.

(There's your fireworks...happy 4th of July for my American readers!)

One set that gets overlooked by many collectors is 1954 Bowman. It doesn't always get respect from hobbyists, considering it came after one of the truly classic sets in 1953 and before the unique TV style of 1955. It also gets little love because it didn't feature rookie cards of Hall of Famers Hank Aaron, Ernie Banks or Al Kaline (or even Tommy Lasorda) like their Brooklyn-based competitors did.

Despite that, they still have something to offer that Topps couldn't. There's a Mickey Mantle card in the set. Robin Roberts, Ralph Kiner, Roy Campanella, Pee Wee Reese and Bob Feller were also exclusive to the set. Then there's a Ted Williams card that is worth more than the two that Topps issued combined.

You can read about the 1954 Bowman set at my website, along with a checklist with all the variations caused when Bowman decided to print the cards before double-checking some of the stat lines for accuracy.
Here's an example card, and let's go with the beloved Brooklyn Dodgers: 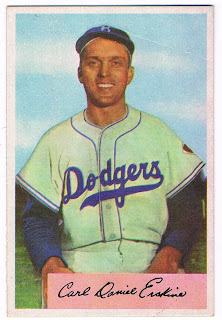 Card #10 -- Carl Erskine, Brooklyn Dodgers
While the photography isn't as sharp as what was found on the 1953 Bowman set, it's still not bad. All that obscures the photo is a card with the player's signature on it. Flip it over and it still looks nice: 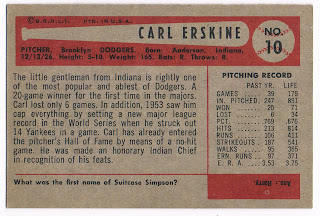 Card #10 -- Carl Erskine, Brooklyn Dodgers (Back)
A bat and ball are used as part of the back design, and the box that encloses both also includes the personal information (or vital stats) found on every card. There is a written biography, and some year/career stats that follow, as well as a trivia question.

While the box on Erskine's card is pink, that wasn't the only color. Here's one that was green: 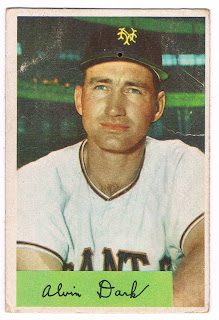 Card #41 -- Alvin Dark, New York Giants
And another one that was yellow, with one little twist: 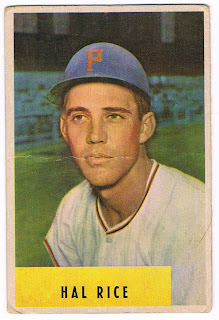 Card # 219 -- Hal Rice, Pittsburgh Pirates
This time, Hal Rice's name is printed out, rather than using his signature. There are several cards in the last series of the set that have this, which makes me wonder whether Bowman was in a hurry to get them out and was unable to get an adequate signature in time for the printer.

My only thing about that...is that Bowman should have had contracts on file with good signatures on them. But I digress...

If you don't count the #66 Ted Williams card that was discontinued and replaced with Jim Piersall, each team has 14 cards. The numbering system rotated teams (American League, then the National), which is really neat if you have a set in 8-pocket pages. Your favorite team will appear in the same spot on every second page and every second page contains players from the same league. The rotation went: Yankees, Red Sox, A's, Indians, Orioles, White Sox, Tigers, Senators, Giants, Dodgers, Pirates, Reds, Cubs, Cardinals, Phillies and Braves. Then, at card #17, the cycle began again.

Unfortunately, some larger-size Bowman cards were trimmed down to match the size of the Topps cards that came later, such as this one here: 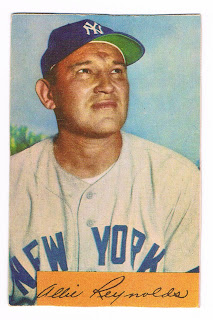 Card #113 -- Allie Reynolds, New York Yankees
That's right, there are no borders around Allie Reynolds anymore. Some collectors may consider this to be a shame, I see it as a nice filler for my binder until I pick up a better copy.

I'll continue on this topic on Wednesday.
Posted by Chris Stufflestreet at 8:30 AM