While working on a recent project for another Website, I came across this card: 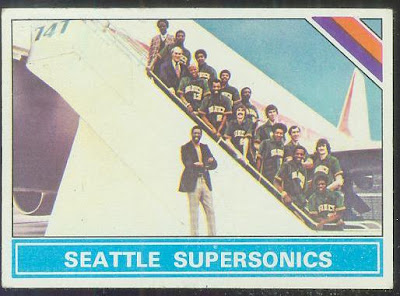 It's the Seattle Supersonics' team card from the 1975-'76 Topps basketball set.

I like the idea of having the team stand in front of an airplane since they're named after one. However, they didn't stand in front of a Supersonic plane like the Concorde, it's a 747. However, the company that manufactured the 747 was Boeing, a company that was founded in Seattle. So, there was a "hometown" angle behind the picture.
Posted by Chris Stufflestreet at 8:30 AM

Email ThisBlogThis!Share to TwitterShare to FacebookShare to Pinterest
Labels: 1975-'76 Topps