Today's question comes from Mike, who has found an interesting surprise:

"I found some old baseball cards in a wall of a building. They are not in real good shape, but they might be worth something.

Here are the names:

That's some of them. They are Big League chewing gum cards. There are also some Indian cards." 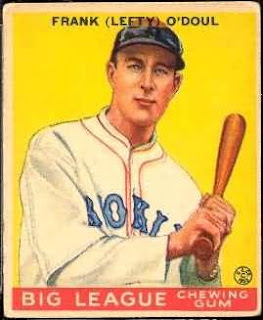 (This player has the highest lifetime batting average for somebody not named "Shoeless" Joe Jackson who still isn't in the Hall of Fame.)

Sounds like you have some 1933 Goudey cards. Here's a link to a page that describes them and gives a checklist (so you can check the card numbers to be certain):


In VG condition, the common cards from this set go for $5-15 each, but Hubbell and Terry are Hall of Famers and should get more. Likewise, O'Doul was a big star whose major league career was short for the Hall but still phenomenal. I'd suggest looking at completed auctions on eBay to get a good idea of what people are paying nowadays.
Posted by Chris Stufflestreet at 8:30 AM