While doing another project, I came across a few cards that looked a little strange. Here's a card of Jerry West from 1972-'73: 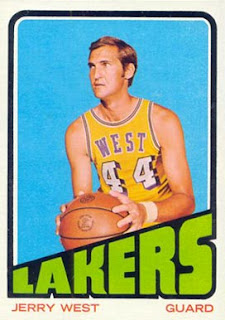 No, this isn't an All-Star jersey...
Jerry West was a heck of a basketball player. When he retired, he became one of the top executives in the sport. He's not the kind of guy you'd expect to just put on his shirt backwards.

But he wasn't the only one: 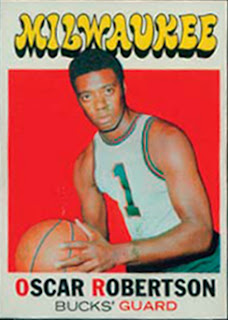 In the early days of making its basketball cards, Topps got the rights to feature the images of the players, but not the team logos. Therefore, they weren't able to shoot the front side of the jersey unless it simply had the city name on it. Since the cards above featured players wearing their home threads, they either had to place a basketball in front of the logo or turn the shirts around.

The lack of permission to use team logos in those first few years is also the reason for having so many posed shots then, as well. Fortunately, the permission was eventually obtained and Topps was able to use game action photos a few years later. That was a lot better than what football fans put up with for the rest of the decade.

But that's a post for another day.
Posted by Chris Stufflestreet at 8:30 AM