"Spent a week in Arizona and picked up some pre-war cards at a shop down there. Goudeys and Play Balls mostly, so I am now officially collecting a few pre-war sets. No dupes yet but one of the cards he had it the stack was a card or maybe not a card that I can't find in the Beckett. Any help with this is appeciated. The front is a black and white photo of Ping Bodie C.F.-New York Americans, the back says Witmor Candy Company AD about a 80 card set one "picture" in each package of Witmor's Kisses. It feels thick like a card and is about the size of a Tobacco card." 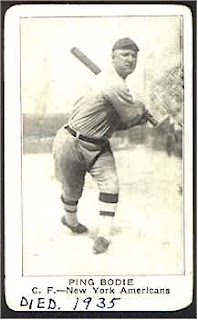 (Not his card, but an image I had of an E121 Bodie to show for the purposes of illustration.)
A:

Witmor is one of the many different backs that are found on the backs of cards similar to E121.

They're not really grouped in as E121 in hobby guides, they're classified as uncatalogued.
Posted by Chris Stufflestreet at 8:30 AM