Continuing from the multi-player rookie card topic I brought up on Wednesday...

I mentioned that it was common for players to appear on more than one of these cards as they established their careers. Lou Piniella appeared on three of them...and a player named Bill Davis appeared on five. 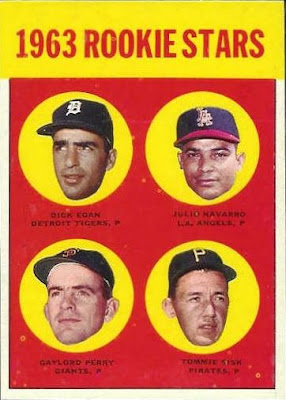 There's Gaylord Perry in the lower left-hand corner. Collectors remember the set for Pete Rose's rookie card, as well as Willie Stargell's. Another rookie card shows future basketball Hall of Famer Dave DeBusschere. So why isn't this one held in the same regard?

In Gaylord Perry's case, he was already shown on a card in Topps' 1962 set: 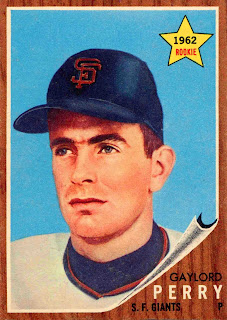 In one year, he went from his own card to one he had to share with three others. Good thing for him, the Giants didn't pay much attention to this demotion and kept him around for a few years longer.
Posted by Chris Stufflestreet at 8:30 AM