They're Coming Right at Me!

While collectors sometimes know 1970-'83 Kelloggs' cards by the "Xograph" name that
appears on the backs, that was actually the name that was given to the process of using several layers to achieve a "3D" effect on the cards. While they were neat, Topps actually debuted the process two years earlier: 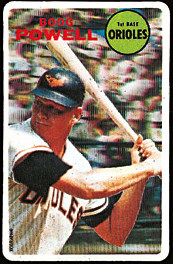 In fact, the "Xograph" name is in the lower left corner. And you can see the "dot" element that was part of the design of the base Topps set in both 1968 and '69.

This design has found its way into more modern collectors' hands as an insert set along with last year's Topps Lineage, but was originally used for a test set in 1968. Essentially, a sharp player image was added to an intentionally blurry stadium background, and the "ribbed" plastic front gave it the appearance of a 3D image when it was moved around. 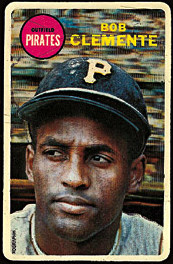 However, production was limited and distribution was scarce, so these cards command a pretty hefty price tag today. The Roberto Clemente card shown above is the most valuable in the 12-card set, selling for thousands of dollars in top grade. (These images aren't my own cards, though; these belong to another collector).

Clemente's card exhibits the same type of cracking that plagues Kellogg's cards, due to the way that the plastic coating of the image can shrink over time. The Bill Robinson card below shows it as well: 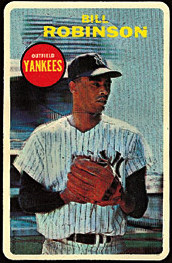 Due to the "test" nature of these cards, the backs are completely blank.
Posted by Chris Stufflestreet at 8:30 AM