As many of you know, I write two card-related blogs. In addition to this one, I write a card-by-card excursion through the 1973 Topps set and the sometimes interesting choice of pictures used on the fronts. Called 1973 Topps Photography, bad action shots, airbrushed players and 1970s fashion get their due.

If you're also a regular reader of that blog, thank you. If you're not...then feel free to take a look. I'm still a little less than halfway through the issue and there's plenty more to share.

My post over there today features a multi-player rookie card. Those weren't new in 1973...Topps had included them in every one of their base sets since 1962. In the case of the card shown today, one of the player's wasn't even a true rookie, as he appeared on two other cards before that.

However, in this case, the 1973 card was actually the "normal" one in the group. That is the oddity here.

The player in question is Bob Reynolds. His first card was part of the final series of the 1971 Topps set: 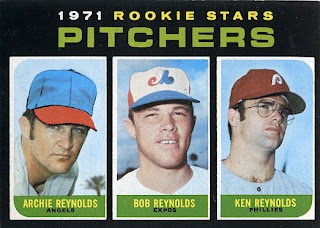 1971 Topps #661 -- Rookie Pitchers
This card featured three pitchers, all from different teams. Since Topps kept these rookie cards sorted by team (and showing two players, not three) in the earlier series, they were likely trying to wrap up their loose ends late in the production cycle to get the set finished. In those cases, they'd group the players by position and even by league.

In this case, they lumped three players together who all had the same last name.

Reynold's 1972 card was memorable for a different reason: 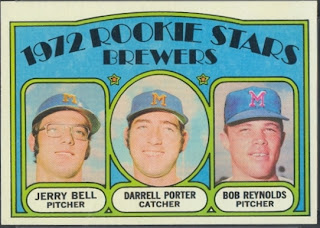 1972 Topps #161 -- Brewers Rookie Stars
Topps stayed with the three-player format for 1972's multi-player rookie cards, and this one had a fairly noticeable error. The pictures of Darrell Porter and Jerry Bell are switched, so Bob Reynolds is the only player on the card who's properly credited.

For the third multi-player rookie card showing Bob Reynolds, Topps decided he had had enough excitement: 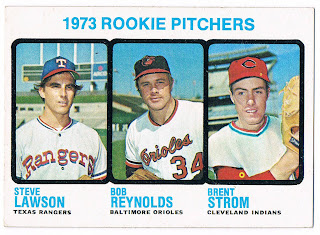 1973 Topps #612 -- Rookie Pitchers
Other than Brent Strom being in an obviously airbrushed uniform...there were no hijinks this time.
Posted by Chris Stufflestreet at 8:30 AM