Here's an email I received last week from a lady named Patty:
Q:
"(I have) 3 cards. They are  #2 of 33 Boog Powell; Willie Horton #9 of 33; Maury Wills #24 of 33.
They look like regular pictures with signed names in blue ink.
They just have a name and # on back with the words T.C.G. PRTD.IN U.S.A."
A:
Fortunately, having the numbers is a big help here...and yes, I can identify your cards. What you have are 1969 Topps Deckle Edge cards. Here's an example: 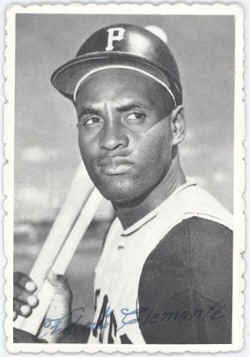 As you can see from Roberto Clemente's card from the set, they're black & white pictures that have been given a "scalloped" effect on their edges (or, as Patty says above, they "look like regular pictures," as that style was popular among snapshots taken in the era. A facsimile autograph in blue ink has been added to the front of the card.

The backs are mostly plank, except for a little bit of info along the bottom: Inside a box, there is a name and a card number, along with the manufacturer's info Patty mentioned in her email.
These cards were included as inserts inside wax packs in 1969, which makes them fairly common. While they're not overly expensive, they are pretty easy to build a base set out of and represent the first complete set from before my birth that I was able to put together.
There are actually 35 cards in the set, however. With 33 total cards, there was at least one player from each of the 24 teams in the league at that point, even though the team itself isn't specifically named in the design. When two of the players were traded, Topps substituted them for former teammates (albeit it by switching the numbers) in order to keep the balance.
As a result, card 11 either shows Hoyt Wilhelm or Jim Wynn and card #22 has either Rusty Staub or Joe Foy. Wilhelm and Foy were both Royals, and Staub and Wynn were both shown as Astros. The later additions -- Foy and Wynn -- are the scarcer versions, but aren't too hard to find.
Posted by Chris Stufflestreet at 8:30 AM