(Much of the info here is lifted from this page on the Vintage Baseball Cards Website, but I wrote that. So I give myself permission to copy it...) 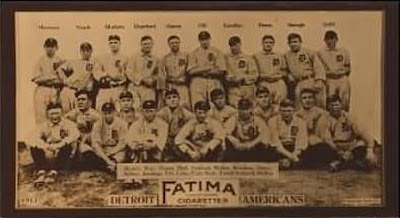 T200 Fatima -- Detroit Tigers Team
What you see here is one of the earliest "team cards" ever made. While a staple of Topps sets from 1956-'81, they weren't pioneers when it came to sticking an entire team onto one card.

Essentially an issue of team photos for each of the 16 teams then in the major leagues, T200 cards are found in two sizes. The regular cards, which were included in boxes of Fatima cigarettes, were 2 5/8” by 4 ¾”. A larger-sized version of the same 16 teams was offered through the mail in exchange for 40 coupons. The larger cards are much more rare and valuable than the smaller ones. For whatever reason, the larger cabinet-sized photos weren't assigned their own separate number in Jefferson Burdick's American Card Catalog. Instead, larger cards are known as T200 Premiums by hobbyists.

Rather than being a lithograph on cardboard like most T-series cards, T200 cards are glossy photographs on paper stock. Each player, manager and mascot is identified by name, either above their heads or inside a small box below the assembled group. At the bottom of the card, a Fatima ad splits the team's city and league names. Card backs feature the details of the redemption offer for the larger-sized cards.

These cards were issued in 1913, which was very late in the tobacco card era. The most notable card in the set featured the Pittsburgh Pirates and Honus Wagner, whose presence on a tobacco card should be interesting to the collectors saying he refused to appear on anything that promoted smoking. The format and timing also allowed many players who never appeared on their own cards to be featured. However, a couple names (like Herman of Cincinnati and Inglis of the Cubs) are unknown players.

There is a varying level of scarcity among the smaller-sized cards. Boston N.L. is the most diffcult, with New York A.L and St. Louis A.L. club slightly less scarce, with Detroit and St. Louis N.L. almost as difficult. On the other hand, Philadelphia A.L., Boston A.L., New York N.L., Brooklyn, Cleveland and Cincinnati are the most common. Among the larger-sized premium cards, there aren't any levels of scarcity, other than the fact that they're all scarce (and there fore valuable).
Posted by Chris Stufflestreet at 8:30 AM

Email ThisBlogThis!Share to TwitterShare to FacebookShare to Pinterest
Labels: t200