...it's great news for collectors of vintage cards, at least.

As most collectors understand, there have been some major changes in the hobby since the Topps monopoly was first broken in 1981. With the added competition from several new companies and the explosion of the hobby, there ended up being several more sets  issued after that than in all the nearly 100 years before it. This presented a dilemma to collectors who only focused on vintage, since the annual price guides were often filled with too many sets they didn't care about. In fact, I knew some collectors who tore their catalog in half to remove the newer section once it began featuring separate sections for vintage and modern cards.

This year is different: 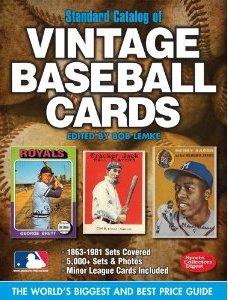 After several years of hoping for it, the 2012 copy of the SCD "Big Book" is going to cover issues through 1980 only. As a result, it will be called the Standard Catalog of Vintage Baseball Cards. It can be picked up through Amazon at the link below (as a pre-order until September):

The book is also available on the Hobby Bookshelf page on my Website.

Sadly, it does not include a CD-ROM containing set info as PDF files as the guide did several years ago. However, some collectors will gladly trade that off with the fact that there is less paper gone to waste on sets that don't concern most vintage collectors.

According to editor Bob Lemke, there are no plans to print a separate guide for modern cards. That seems odd, but I suppose Beckett will still feature them in its own guide.

(Edited to add: the comments section shows that there are two different ways of seeing the new format. While my own collecting interests lead me to prefer the pre-1980 approach, I readily admit the "it's no longer complete" argument is also a valid one.)
Posted by Chris Stufflestreet at 8:30 AM