Here's a card from a set with a unique design: 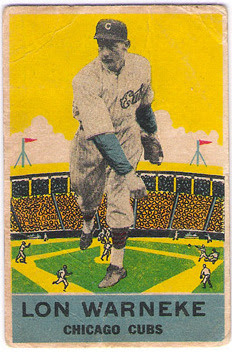 This card is from the 1933 DeLong set. The design has been used again in modern sets, but basically features a black-and-white player image in front of a generic stadium design that makes him appear larger than life.

There are 24 cards in the set, and 15 of the players are Hall of Famers, which gives a nice representation of the era's stars. There's no Babe Ruth card, however, which keeps the set price lower than it might be. The key card features Lou Gehrig.

The backs feature tips on playing the game from Austen Lake. He was a Boston-based journalist of the era who also contributed his writings to the backs of the 1934-'36 Diamond Stars and 1935 National Chicle football sets. 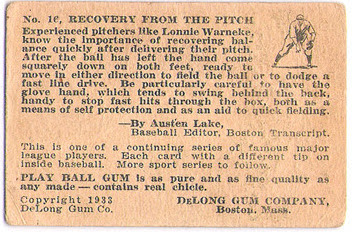 Email ThisBlogThis!Share to TwitterShare to FacebookShare to Pinterest
Labels: 1933 DeLong