I recently picked up some 1969 Topps cards for my collection and was reminded about the pictures used in the set. Thanks to expansion and a possible fight with the players' union, Topps used photos from the past and pretty much avoided anything that was taken in 1968 at all.

Here's one of the cards:


Tommie Aaron should be the subject of his own post. He was the younger brother of his teammate Hank Aaron, whose presence in the Braves' outfield was one of the reasons he didn't get more playing time. There's quite a family resemblance; I often wonder how many pulled this card out of the pack in 1969 and mistakenly thought they got Hank Aaron's card instead.

As it turned out, the image was several years old: 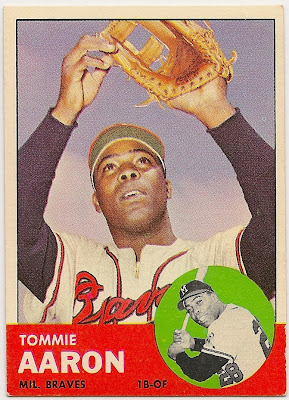