Here's an interesting question sent in by Brian:

I don't own the card, so I had to make a quick online search. Sure enough, the cards found had both variations. Here he is with the team name: 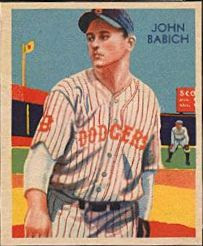 And here he is without any designation on his jersey: 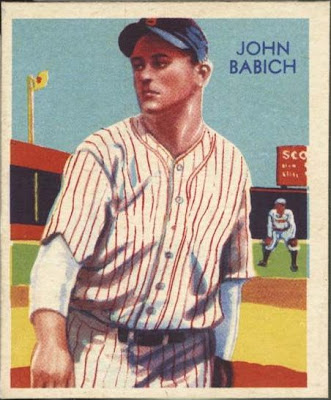 To answer the reader's question, it's not an error card (technically, nothing is wrong, so by definition it can't be an error). What this is would be a variation. While errors and variations are often lumped together by hobbyists, there's a distinction nonetheless.

During my (unscientific) online research, the backs of the three "non-Brooklyn" variations all had a blue back from 1936, but none of the others did. Since Babich's card was one of many in the set with three different back variations, it's possible that the name was removed during the last printing because he was traded to the Boston Braves before the 1936 season. There wasn't a way to produce a new card in time, so National Chicle "fixed" the problem by altering the jersey.

However, this is speculation, so I'm tossing this one out to my readers. Does anybody have any info on this one?
Posted by Chris Stufflestreet at 8:30 AM