A Crash Course in Exhibits

I've had this question sent to me a few times over the years:

"The 1947-66 Exhibit set...was that really issued over a 20-year period? If so, how did they know which players would be major leaguers?"

There's really two questions here. The set was indeed issued over a 20-year period, but each year new cards were added and some were dropped. Additionally, new cards appeared of star players over time, and players who were traded appeared on their new teams.

There are over 300 cards in a complete set, but they were issued in an ongoing series that took 20 years to complete. In reality, many of the players in the set only appeared for a year or two. So no, Ernie Banks wasn't in the set in 1947 (he'd have still been in high school then), but he was definitely part of the set in the late 1950s and into the 1960s.

There were a number of slight formatting changes over the life of the set, meaning that there are a number of variations that go beyond the variations shown in my Website's checklist that involve placement of the copyright line and other issues. Those could easily take up another post here.

However, the Exhibit Supply Company issued their postcard-sized cards for a 45-year period. Many of those years were also cases where new cards appeared with the older ones. Here's a quick rundown of the general issues: 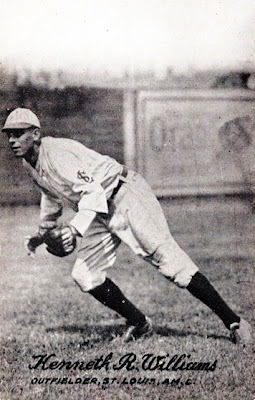 In 1921, the company issued their first cards. They used a script-style name along the bottom, along with the player's position, team city and league. The card above shows the American League as "Am. L," a distinction that cards from later sets would change. New cards appeared through 1924 in the same general style, though some later cards featured white borders as well. 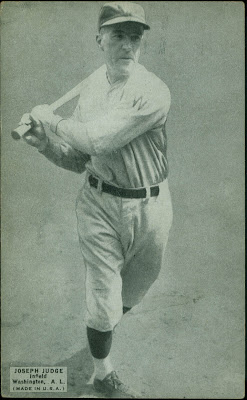 In 1925, the design was altered. The info was changed to a printed font and placed into a white box in the corner. The name, position, team city and league were retained, and a "Made in USA" designation was added to the card. This configuration lasted only one year. 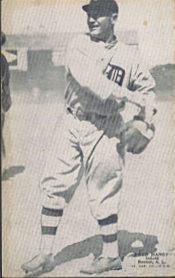 In 1926, the "new" cards appeared without the white boxes on them. They were also tinted differently, which helps collectors identify the years.

At the same time a separate set of Exhibits appeared that recalled the "script" design used earlier: 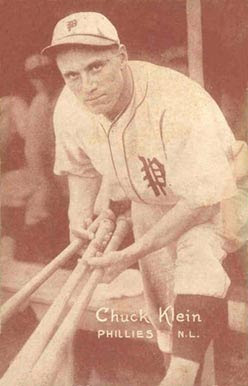 There was one big difference, though. These cards had postcard backs and a notation that they were not to be inserted into Exhibit machines. They really don't belong in this entry, but are similar enough and commonly confused with their vended cousins. So I figured I'd show one here as well. 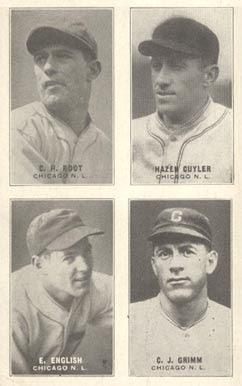 In 1929, the cards were changed to show 4 teammates together. This format continued for 10 years, and 16 "new" groupings per year -- one for each team -- were common. The "new" cards were interspersed with older groupings, as long as the four players were still on the team. 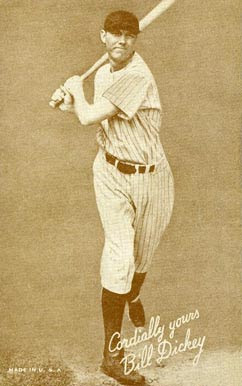 In 1939, Exhibits reverted the single-player format. A greeting was added, which created the name "Salutations" for the set. At the same time, the team cities were dropped from the cards altogether. Even though the references showed these cards as an eight-year project, some Salutations Exhibits were issued well into the next era. 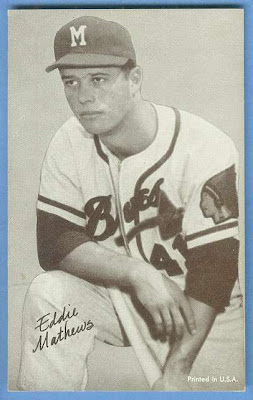 In 1947, All that was included on the cards was a player's name and the "Printed in U.S.A." line. This was the most familiar style of Exhibits, given the aging of the Baby Boomers, the players involved and the fact that the series ran for 20 years.

It's been ascertained which years each card was available, but the 1962 and '63 issues are easiest because career stat lines have been added to the backs. The issue may have gone on for longer, but the Exhibit Supply Company went out of business in 1966.
Posted by Chris Stufflestreet at 8:30 AM