Cut From a Different Cloth

Today's post features a card of a player elected into the Hall of Fame last year: 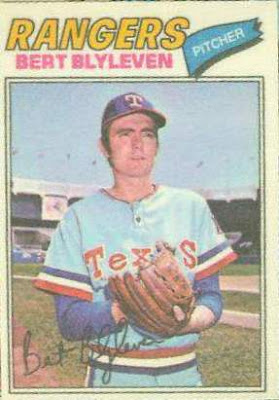 While it looks like an out-of-register 1977 Topps card, it's actually made out of cloth and placed on an adhesive sticker backing. Often mislabeled as an "insert," it was actually issued in its own pack with a checklist card that was part of a puzzle that showed one of the two All-Star squads after being assembled. There were 55 stickers in the set and 18 different checklist cards.

Though the front looks the same, the back has a different design: 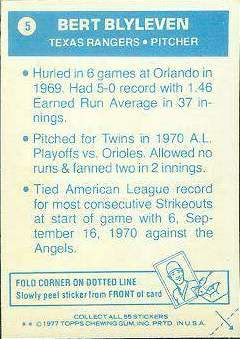 If you look at the bottom left corner, you'll see two asterisks. Each card in the set is found with either one or two asterisks there due to the layout on the printing sheet. Completists will try to get all 110 cards for a "master set," but there isn't any price between the variations.
Posted by Chris Stufflestreet at 8:30 AM