It Seems the Pin Was Tastier

With the eight players involved in this set, this pin is believed to be from around 1934: 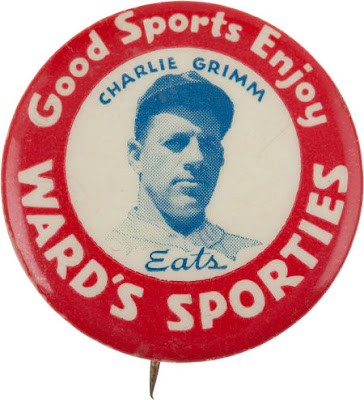 It's obvious that Ward's Sporties is some type of food product (Ward's is the bakery that produced Tip Top bread), but nobody seems to be certain if it was cereal, a cracker or a cookie or some other type of product.

Evidently, it wasn't very good, as the pins that came inside the packages are quite rare and valuable today. The pins have been given a PD9 designation in the American Card Catalog and have blank metal pin backs. Of the eight known players in the complete set, most are Hall of Famers, which makes them even more valuable.

As with cards, condition dictates the final value (as many can be found with chipping, denting and other damage), but if you happen to find one you know it'll quickly find a home.
Posted by Chris Stufflestreet at 8:30 AM