The NBA Finals kicked off last night and the Oklahoma City Thunder took the first game. In commemoration of that, here's a hoops-related item that doesn't get seen all that often: 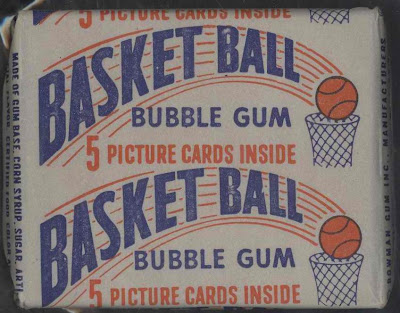 It's an unopened pack of 1948 Bowman basketball cards. Available for five cents, it contained five cards plus a slab of bubble gum. Though not the earliest basketball cards, it was the first nationally-issued set after both World War II and the founding of the NBA. It's a fairly safe bet they didn't sell well, since Bowman never tried to make them again. In fact, fans had to wait until 1957 before Topps tried for the first time.

I need to say that this isn't my pack...I'd be way too tempted to open it.
Posted by Chris Stufflestreet at 8:30 AM