Yes, I'm a little late to the party...but after a little extra thought, I'll answer Fuji's question about my favorite vintage card. All of them. I realize that's a cop-out answer, but it's true.

So here's a vintage card I own, and have shown here before: 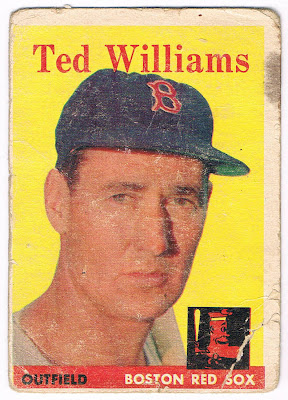 I bought this at a card show in Kingston, Ontario, Canada in the late Summer of 1989. It was back when there seemed to be a show every weekend within a 25-mile drive of my house, and this one was interesting because it was a little farther than that and involved a trip over the border for me. The price? $7.95 Canadian, or $5 and change in U.S. currency  (the exchange rate was more favorable to me back then).

I was 16 then. At the time, it was my first Williams card from his playing days. It was card #1 in the set, and the first Hall of Fame player I managed to add to my 1958 Topps set (which stood at about 10-15 cards). Those were all great reasons why -- as a collector -- I enjoyed getting this card.

Today, there's another reason I like it. When I was 16, I still wasn't working and my discretionary spending needed to be approved by The First National Bank of Mom. And she balked at the price. For that kind of money, I could find something that didn't look as ugly as THAT card.

The seller seized the opportunity. "Actually, Ma'am...if it were in top condition, it would be worth $375." He had watched me look through his cards. He saw the way I flipped through stuff but stopped at that Williams card and considered it for a while. Perhaps he'd used the technique before, but it made Mom do a double-take and pull out the money.

And that's what I think about now when I see this card. It isn't all the things I considered in 1989. It's the remembrance of a time that seemed simpler, when going to card shows was a family activity. Back then, it wasn't too uncommon to see a parent and child looking through cards; today, it's not really as common. Mom's still around...and sometimes I have to remind myself that I'm fortunate to have her, because several of my friends have lost theirs in the meantime. But this card -- as ragged and beaten-up as it is -- will always be a reminder of a time in my life where she was willing to chauffeur me around nearly every weekend and let me indulge in my little cardboard addiction.

After 23 years...my perspective has changed.
Posted by Chris Stufflestreet at 8:30 AM