It's summer, and we all remember the single-serve portions of ice cream that were available to us to eat (sometimes with a wooden "spoon"). The lid was made of cardboard and came off with the pull of a little tab. 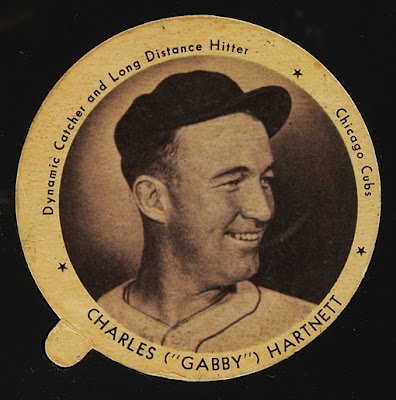 This is a 1937 Dixie Lid, which includes pictures of athletes from several different sports as well as actors. There were only four baseball players: Charlie Gehringer, Gabby Hartnett, Carl Hubbell and Ducky Medwick. The reverse side looked like this: 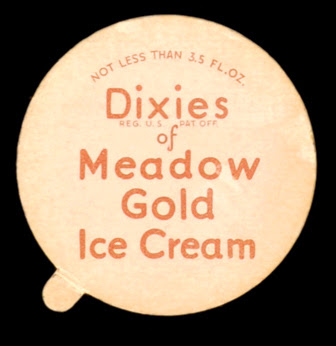 That was actually one of several advertisements. This one features the Dixie's of Meadow Gold, but others had advertisements for Hoddsie's, Turnbull's, Abbot's, Swift's and other local dairies. 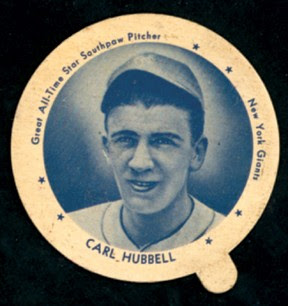 Once again, the set contained four baseball players, but only Carl Hubbell was retained from 1937. The other players were Bob Feller, Jimmy Foxx and Wally Moses. A different photo was used for Hubbell's card (his mouth was closed in '37), but the 1938 cards can be distinguished by the blue ink used on their photos.

Both years can be found in two sizes. The smaller one is 2 and 5/16 inches in diameter, and the larger is 2 and 11/16 inches across. In either case, they are not considered to be complete unless the little tab is still intact.

Premiums were available as redemptions in both years,using colorized versions of the same photo used on the regular lids and with a playing tip on the back. I showed the 1938 version with Bob Feller here in 2010: 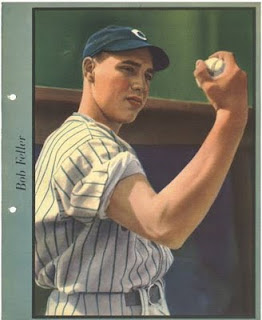 The premiums measured 8 inches by 10 inches. Both years saw a 24-card set and featured the same baseball players found in the regular set. An album was also available to hold them (note the holes on the left side of the page).

The idea was resurrected in 1952, with a similar format. New sets were issued in 1953 and '54. This time, the name and team appear along the bottom, under the player, and a premium offer or other ad running around the picture: 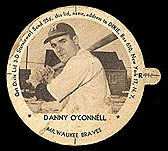 This lid is from 1954. Not only is O'Connell shown as a Milwaukee Brave (they moved from Boston in 1953), but the lid has a "3-D Starviewer" ad around the picture, which only appeared that year. The 1952 set has 24 cards. The 1953 set also has 24 cards, but four variations (two cards noting the Braves' move and two others reflecting trades). 1954 has 18 cards, and each subject can be found with a "right" and "left" variation.

This time, the lids were available in three sizes for two of the years. Most commonly, they're found as 2 and 11/16-inch diameters. However, a 2 and 1/4-inch diameter and (in 1952 and 1954) a 3 and 3/16-inch diameter versions are also available. The price differences for each version vary by year, but the large number of variations across all three years makes quite a challenge for master set collectors. 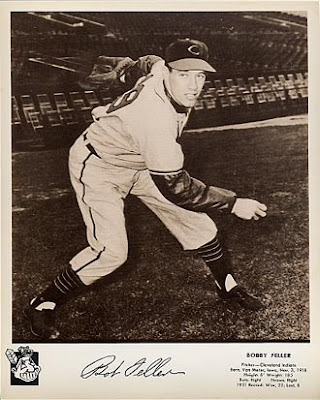 Bob Feller here is from 1952. Both sets are essentially 8-by-10 photos on heavy paper, and the backs are blank. A stat line in the bottom right corner in both years' sets will determine which year it was issued, as each set shares several players.

In all, there were 24 premium cards in each set (once again, the same players included in the regular sets but without variations) and were redeemable for any 12 lids. Given that, the premiums are much rarer today.
Posted by Chris Stufflestreet at 8:30 AM