Last month, I featured a card from 1969 that featured a six-year old photo, and here's another one that recycles a photo: 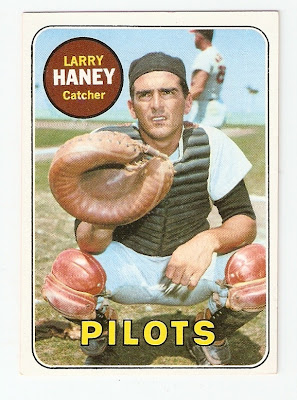 Card #209 -- Larry Haney, Seattle Pilots
Since the Seattle Pilots were a new team in 1969, Topps was forced to use older pictures for the players because there wasn't any way to get the newer photos ready for the set. They may have printed in series, but there was no way they were going to deliberately short teams (and fans in those team's areas) by skipping over them until later. For Haney, a catching pose is great, especially since it can be used again without airbrushing. The cap is on backwards, the chest protector covers up his team's markings, and all is well.

Except...he's catching left-handed. There aren't a lot of left-handed catchers, and Haney isn't one of them. And a quick look at the Orioles coach in the background (who I'm fairly certain is Billy Hunter) confirms that the negative was flipped.

The same pose appears correctly in 1968: 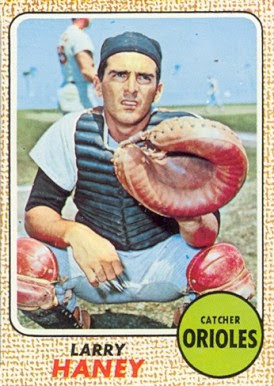 Card #42 -- Larry Haney, Baltimore Orioles
Interestingly, this card shows that an unknown Oriole running in the background was covered up by the circle in the 1969 design.

Although an error was made, it was never corrected...so there's no extra value to the 1969 card other than its oddity.
Posted by Chris Stufflestreet at 8:30 AM