In celebration of July 4, here is a player from the past who was a noted for his colorful outlook about life:

In 1952, Billy Loes flubbed a ground ball during game six of the World Series, claiming he'd "lost it in the sun." This card appeared in 1954 as part of a promotion by the New York Journal-American, an afternoon newspaper in the city that rose from a 1937 merger between two papers owned by William Randolph Hearst and stayed in circulation through 1966, when a decline in afternoon editions doomed it.

I wrote about this set in my Vintage Baseball Cards Website, but one thing you won't find there is a back. Since players from all three New York City teams of the time were featured, each team has a different back featuring the 1954 home schedule on it: 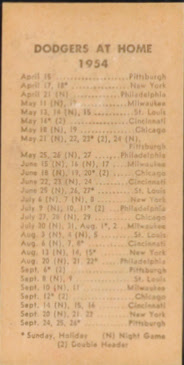 Happy Fourth.
Posted by Chris Stufflestreet at 8:30 AM