A "Taste" of the West Coast

For people who grew up with it, Shakey's Pizza brings some memories of dixieland jazz (sometimes played live), which was a rabid interest of its original co-owner Sherwood "Shakey" Johnson. When Johnson served in the Navy during World War II, he caught malaria and that gave him the nervous condition that became his nickname. The chain was a largely West Coast institution and even spread through other countries across the Pacific Ocean.

Johnson had sold his interest in the business before these cards appeared: 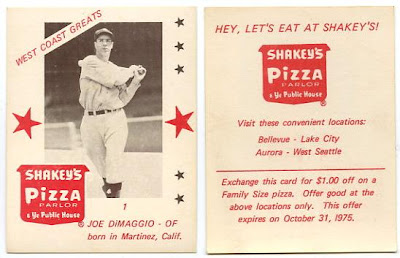 In 1975, a set of 18 cards was produced by the Washington State Sports Collectors Association that was entirely made up of star players born on the West Coast. The DiMaggio card above was given out to the attendees of a local show in Seattle, which encouraged them to go and visit their local restaurant (the locations are listed on the back side of the card).

The cards are slightly larger than what we now call "standard" size. It is said that there were 1,000 DiMaggio cards printed for the show. The complete 18-card set has an approximate book value of $30, but the cards are more scarce than that price might indicate.

In 1976, the collectors' company was a lot more hopeful and put out a much larger set of cards in conjunction with Shakey's: 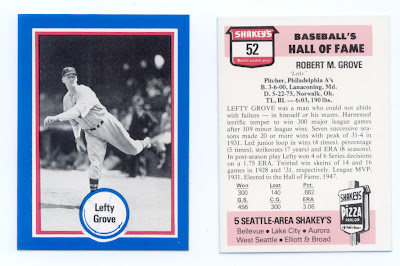 The 1976 set was issued in four different series. There were 160 cards in all, but the series were all skip-numbered. To confuse things a little, each series was given its own name; Series 1 was "Hall of Fame," Series 2 was "Greatest Players," Series 3 was "Immortals" and Series 4 was "All-Time Greats."

Each series was given the same blue border, and issued in the same "standard" size we now know. Errors led Robin Roberts and Sam Thompson to be issued again in Series 2 with the correct info. There are also two coupon cards that feature Earle Averill that were given away at local shows to entice more patronage of Shakey's. The "regional" aspect was dropped for the set, with players from all over the place, not just West Coasters. 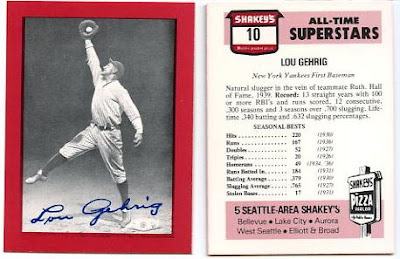 There were 25 base cards this year, with three different players appearing on coupon cards. Featuring red borders, the cards also have a blue facsimile signature. They were also reduced in size, meaning that the cards shrunk each year they were produced. Other than the name of the set ("All Time Superstars"), their backs are unchanged from 1976.

There's been some debate among advanced collectors as to whether they are "legitimate" cards, as the Washington State Sports Collectors Association was a hobby group, but the fact that they were actually sold in conjunction with a product (rather than the cards themselves) make them seen as a little bit different from the offerings by TCMA or Renata Galasso.
Posted by Chris Stufflestreet at 8:30 AM