"Could you provide me with a list of players with the Cleveland Indians from this set? thanks in advance for any help you can provide." 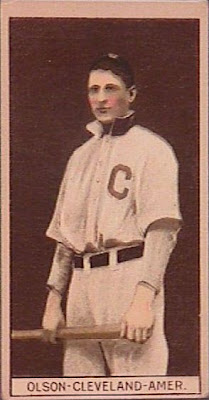 There are some variations if you're a master set collector. Harry Davis is found with either a brown or blue "C" on his cap. Paddy Livingston has two sizes of the letter "C" on his shirt, as well as an "A" variation because he had been traded from Philadelphia. All the cards have the same back variations found in the set as well. My Website fills in some of the details.

As for the team nickname, in 1912 they were still officially called the Naps in recognition of player/former manager Napoleon Lajoie. Lajoie doesn't appear in the set at all, and neither do a lot of stars, which diminishes the appeal -- though not necessarily the value -- of T207 for some collectors.

For all of the T207 team lists...TeamSets4U is a great reference. And the owner (Jeff) is one of the good guys in the Hobby.
Posted by Chris Stufflestreet at 8:30 AM