Today's entry features several die-cut cards that seem to have eluded the desire to tear apart and stand up: 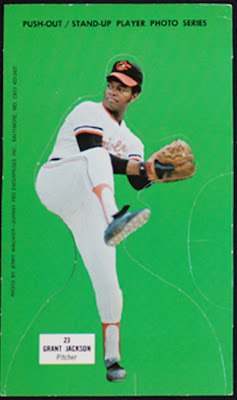 Measuring 3 3/4 inches by 7 3/4 inches, this is from a 1973 set that included 28 Orioles. The set was skip-numbered (as each card had the player's uniform on it) and three players -- Bobby Grich, Jim Palmer and Brooks Robinson -- are available in two different poses.

A card was even made  for manager Earl Weaver, who is no doubt walking over to have a friendly discussion with the umpire about the nuances of the rule book: 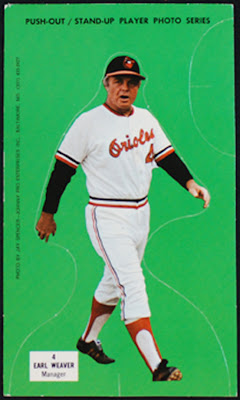 Each card came with a stand, that allowed it to become a five-and-a-half inch figure (we don't call them dolls). Of course, that would destroy their value...but most are found in the hobby as intact pieces.

There was also a Johnny Pro set in 1974 that features twelve players from the Philadelphia Phillies: 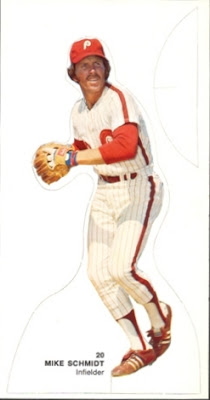 They're slightly smaller but the idea is the same.
Posted by Chris Stufflestreet at 8:30 AM