All This Talk About Allen & Ginter

The newest version of Topps' Allen & Ginter recently hit the stores, and the Blogosphere is abuzz about it. I'm not actively collecting new items, and I'm not so interested in cracking the code, but the name does have some history. Over at the Library of Congress's Website, a number of baseball card images are available to view...and there's no problem with grabbing these images.

A&G was the issuer of two sets in the 1800s that included baseball players. While the baseball cards are the best-remembered things they issued, they were actually part of larger sets that spotlighted athletes from the sporting world in general. 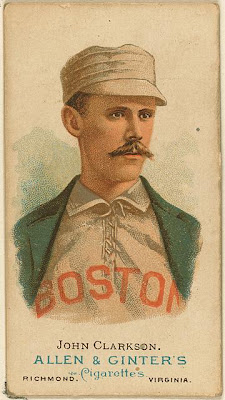 Personally, I think it's a simple design that presents well. A lithograph of a player that simply blends into the white background, it's the basis of the more complex designs Topps uses. There were ten baseball subjects, and six are Hall of Famers. The back features a complete checklist, broken down by the different sports: 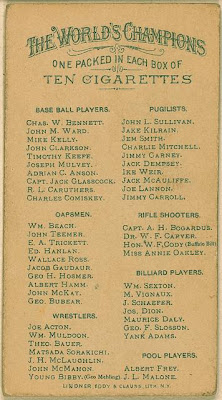 If you look at the subjects, there are even cards for Buffalo Bill Cody and Annie Oakley. They (along with other cards featuring Indian chiefs and other subjects in other A&G issues) are the inspiration for the more general subjects found in the sets over the yeas.

In 1888, another 50-card set appeared with a slightly different design. That set is now called N29 by hobbyists: 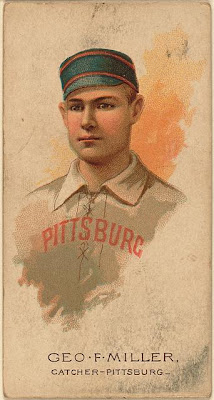 This time around, there were only six baseball players and only one (Buck Ewing) is a Hall of Famer. However, a group of athletes from across the Wide World of Sports appear again, and the back contains another checklist: 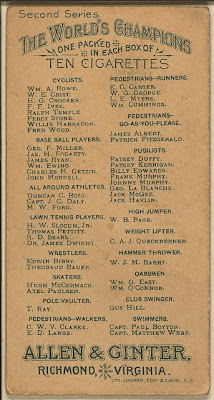 The look and feel is similarly copied into the newer issues, even if the sets nowadays are much heavier with baseball than the originals were. That said, it shows the evolution of our hobby. 130 years ago, there was a wider interest in sports and other objects (in fact, actresses were largely the first subjects of cigarette cards, showing that sex sold even then).  Today, there's a larger focus on specific sports.
Posted by Chris Stufflestreet at 8:30 AM