(The title refers to a 1969 Tom T. Hall song called "Ballad of Forty Dollars." It's worth taking a listen, even if country isn't your thing. It's a great song.)

I've mentioned here before that I belong to a few Online collecting groups. One of those is Old Baseball Cards (OBC), whose terminology on particular sets I've mentioned in the past. Another of their phrases is "Dealer Scum." That's not an indication of how we feel about dealers -- in fact, we love dealing with the good and fair sellers out there -- but a term used for cards that are often more expensive. In this case, "scum" refers to the stuff that sits at the bottom of a barrel, not the dealers themselves.

I recently participated in a Dealer Scum deal with a collector from Maryland. He wanted $40 to help offset the cost of a larger lot, and I got these three cards from the 1960 Topps set: 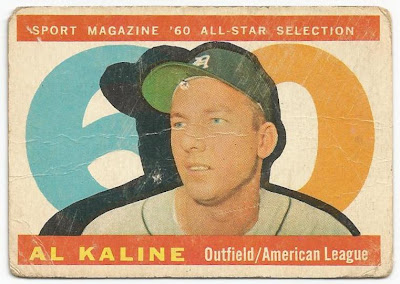 Card #561 -- Al Kaline All-Star
Yeah, it's rough. But I'll be happy to cross as many high-numbered 1960s Topps cards off my list as possible. Though 1960 isn't as tough in the high #s as other years' sets, it's still nice to get them secured. I'll return to the All-Star subset shortly. 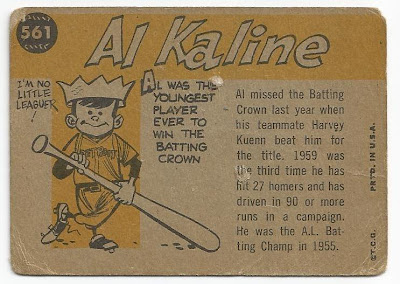 Topps sure got a lot of mileage out of the fact that Kaline won a batting title in 1955 at the age of 20. It was mentioned on several of his cards.

But that was only one of the cards I received. This was the second: 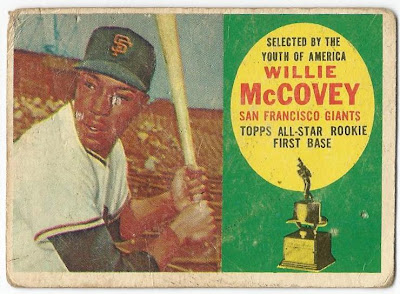 Card #316 -- Willie McCovey, San Francisco Giants
This card is significant for a couple of reasons. First, it's a rookie card of a Hall of Famer. Second, it was the first card of a brand-new subset that recognized the top rookies as picked by Topps. The subset would run through 1978 (except for 1974) and then be resurrected in 1987. McCovey was the first one numerically simply because he was the first baseman and the cards were arranged by position, but there wasn't a better player that could have been featured first. 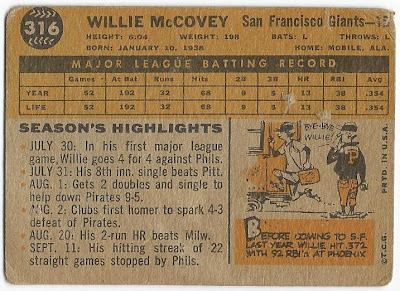 The card was from a specialty subset, but the back was the same design as what the base cards had. Notice one thing on this card: McCovey never came to the Giants until July 30th. He only played 52 games, but played well enough to snag attention as the top rookie at his position, and win the league's Rookie of the Year award.

And here's the final card from the $40 package: 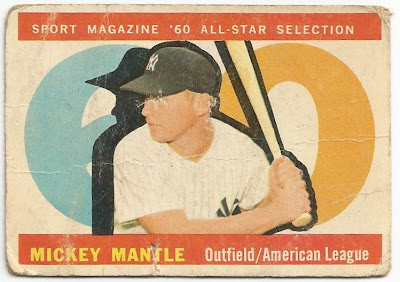 Card #563 -- Mickey Mantle All-Star
I like the design of the 1960 All-Star cards. The big two-colored "60" in the background and the fake "shadow" are goofy, but they're elements of their time and therefore charming. Plus, it's the biggest player in the set. 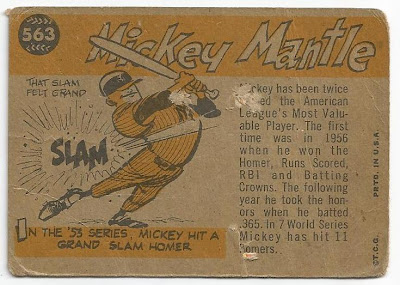 The condition is ragged, there's missing paper on the back and a tear on the bottom...but I still think it was worth the $40 I paid for the three cards. So let me toss out the question...would you pull the trigger on this deal if it was offered to you?
Posted by Chris Stufflestreet at 8:30 AM

Email ThisBlogThis!Share to TwitterShare to FacebookShare to Pinterest
Labels: 1960 Topps