This Has Been a While...

Due to some unforeseen personal issues that I really can't talk about yet, I have been without a scanner for nearly six months. However, I decided that the show must go on, so I've relied heavily on existing scans and borrowed images here in the meantime...over at my other blog, the lack of a scanner is not an issue at all, as I ran off scans of all the cards long ago and have them readily available.

Anyway, you didn't come here to listen to me talk about my personal life. You came for the cards, and now that I have a scanner again, here's a card that I received in a trade during the past few months: 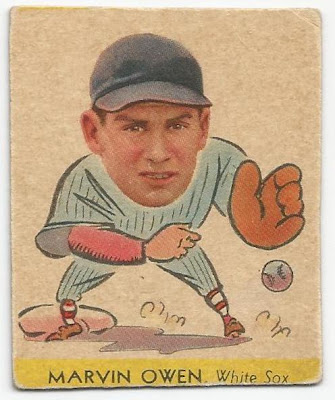 1938 Goudey #263 -- Marvin Owen, Chicago White Sox
It may be trimmed around the edges, but it's still welcome in my own collection. My first 1938 Goudey, it gives me a type card from each main set that Goudey issued. There are 48 cards in the set, but only 24 players. Each player is featured either with or without cartoons filling up the "white space" around him. My Website has better-looking examples of each type.

I would point out that the variation was noted on the back, but it's incorrect: 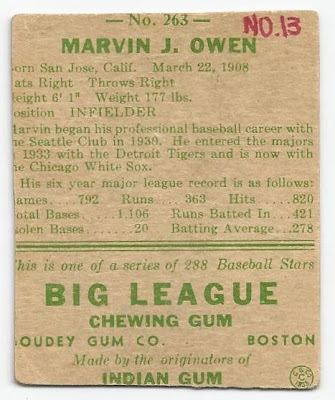 The set began its numbering at 241, which essentially picked up where Goudey stopped its 1933 set (whose back design appeared here as well). By that yardstick, Marvin Owen was the 23rd player in the set, not the 13th, as noted here in red ink. So, either Marvin was the 13th player a former collector obtained...or his math really wasn't that good.

Either way, I'm glad to have it in my collection.

Email ThisBlogThis!Share to TwitterShare to FacebookShare to Pinterest
Labels: 1938 Goudey