Don't get me wrong, it's not a bad set. It has a great design with a large-format picture and a smaller action photos that would be tweaked each year through 1956. There are four Hall of Fame rookie cards (Hank Aaron, Al Kaline, Ernie Banks, Tommy Lasorda), two Ted Williams cards and dozens of stars, even if Mickey Mantle isn't one of them.

No, there are two things that look wrong with these cards: 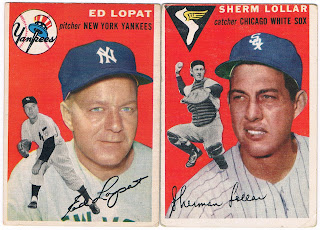 There is no top border,which gives most cards the appearance of being miscut. While long-time readers of this blog know I have no trouble at all with that little imperfection even in cards that should have them, some of the more obsessive/compulsive types in the ranks of our hobby have issues with it.

However, flipping the cards over shows something I don't care for: 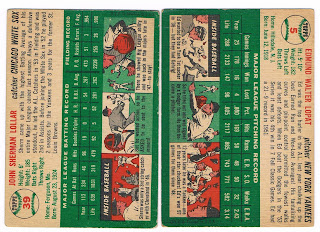 Half the cards in the set are "upside down" when compared to the others. That must have been a real source of frustration to the kids of 1954 when they flipped over their stack of cards to read the backs. Even in binders today, it makes it harder to read the backs.

This is a result of the way the cards were set up on the printing sheet. Cards with matching background colors were paired up like this:

(Note: Lopat and Lollar were probably not paired up on the sheet, but are joined here for demonstration purposes.)
When flipped over, they both align perfectly...that is, if you consider their placement on the fronts.

That said, there are some cards that don't exhibit the "miscut" look of the other 1954 Topps cards. That's because they were given solid white background colors and the top border isn't a noticeable issue. 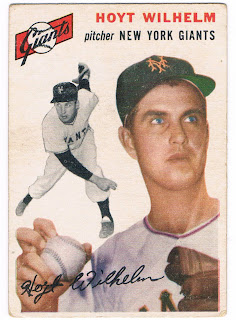 There's a neat little story about how I ended up with this Wilhelm card during the early days of eBay. I may share it here sometime when I don't have other stuff to show.
Posted by Chris Stufflestreet at 8:30 AM

Email ThisBlogThis!Share to TwitterShare to FacebookShare to Pinterest
Labels: 1954 Topps