When the United States entered World War Two, civilian businesses were required to play by some new rules enforced on the entire nation by the war effort. Paper, printing materials, cardboard and ink were heavily rationed and resulted in card manufacturers stopping new card issues altogether. Americans on the "Home Front" were asked to recycle, to conserve energy, to grow their own food as they were being handed ration books. This is something Americans aren't accustomed to in an age where servicemen (and women) are being sent overseas but little sacrifice is asked of those who remain here.

When the war ended, it took some time for gum and card companies to start issuing sets again because many had to start again from square one. They had to begin acquiring materials from scratch, and some prewar companies (like Goudey) didn't survive the transition. It took nearly three years for nationally-issued sets to appear again, but in the meantime a small handful of regional sets were released to help fill the void.

Among the regional sets were many by bakeries, which would include a card inside a wrapped loaf of bread. The 1947 Homogenized Bread set was given the designation D305 by Jefferson Burdick's American Card Catalog, but is rarely called that by collectors. At 2 1/4" by 3 1/2", they are slightly thinner than modern cards. The fronts feature only a borderless black and white photo with a facsimile authograph. They are found with either square or rounded corners (read farther for more about that), and backs are blank. It has been suggested that these cards were distributed separately from the company's loves of bread, since the cards are often found without tell-tale signs of damage caused by the odd shape of bread.

To get an idea of what therounded corners look like, here's Bob Elliot's card from the set: 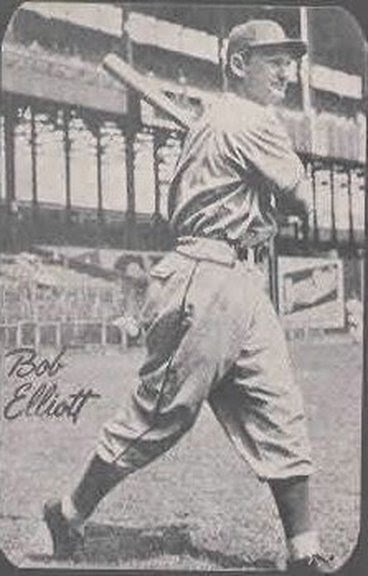 Some collectors refer to the set as "Homogenized Bond Bread" even though the "official" name is simply Homgenized Bread, and that designation gets this set confused with the 1947 Bond Bread set. Both sets feature a similar design and are the same size. Bond Bread cards also have rounded corners. Both sets feature Jackie Robinson cards, however, there is advertising on the back of Bond Bread cards. The biggest difference is that while all 13 of the cards in the Bond Bread set feature Robinson, he is only one of 48 subjects in the Homogenized set. The set features 44 baseball players and four boxers. A omplete set checklist (including boxers) can be found at my Vintage Baseball Cards site.

Twelve of the 44 baseball players in the set are Hall of Famers, and the cards of Yogi Berra, Ralph Kiner, Stan Musial, Phil Rizzuto, Jackie Robinson and Enos Slaughter predate the Bowman and Leaf cards called "rookie cards" by some collectors. Despite the historical significance of the set, they haven't really caught on with collectors. There are some known reprints floating around the hobby -- some "graded" by unscrupulous and little-known companies -- while a large cache of twenty-four of the set's cards (all with square corners) discoverd in the 1980s keeps these cards easily found in hobby circles.

Among those discovered in that warehouse "find" was this Harry Brecheen card: 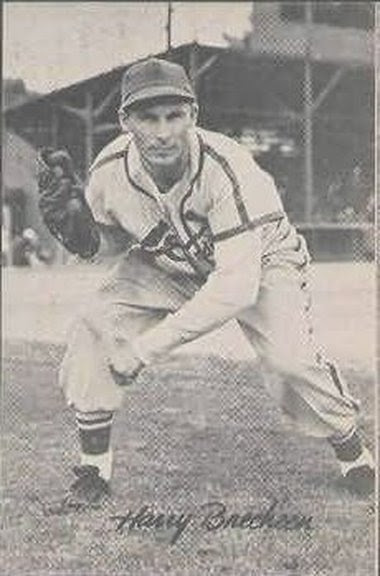 It is worth mentioning that some hobbyists consider square-corner cards to be fakes since the original cards were distributed with rounded corners and the warehouse find may not have been entirely legitimate. In any case, the final say comes down to the individual collector and whether that person wants to add Homogenized Bread cards to a collection. Fortunately, the cards aren't overly expensive.
Posted by Chris Stufflestreet at 8:30 AM