Baseball players have sometimes been known to enjoy a laugh, especially at another's expense. Books are filled with stories of practical jokers in the clubhouse, the bullpen, the dugout and on the field. It's conceivable that some of the fun will spill over to baseball cards.

While hobby legend likes to mention how Lew Burdette posed as a left-handed pitcher for the Topps photographer, they're forgetting the best part of the story. It wasn't Burdette's idea to pull the stunt; rather, one of the guys in his starting rotation put him up to it.

Warren Spahn was known to be a practical joker. When the Topps photographer showed up to take pictures in 1958 for the next year's set of cards, Spahn talked Burdette into switching gloves and seeing how long it would take for anybody to notice. So, Spahn posed as a righty and Burdette used Spahn's left-handed mitt.

When the 1959 Topps cards came out, Spahn's picture on card #40 was a close-up of his face (perhaps the Topps proofer noticed that he wasn't supposed to be throwing righty and cropped it out, but we'll never know for sure). However, card #440 has Lew -- misspelled "Lou" on the card -- posing as a lefty. 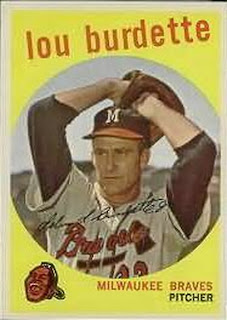 Ten years later, it was Aurelio Rodriguez's turn to fool the photographer. In '68 he was a rookie and virtually unknown, so he asked Angels batboy Leonard Garcia to pose in his place.So while his rookie card says it's Rodriguez, the picture is really Garcia's. 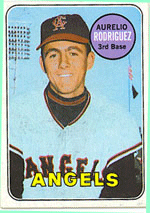 This is one of the cards featured in the great 1973 book The Great American Baseball Card Flipping, Trading and Bubble Gum Book by Brendan Boyd and Fred Harris.  Most of the book is a pictorial gallery of cards with an accompanying comment about each.  Under the 1969 Rodriguez card is the following (which still makes me chuckle):

"The 1969 baseball card of Aurelio Rodriguez is not Aurelio Rodriguez at all but the Pittsburgh Pirate bat boy.  This is in the nature of a little joke by Aurelio who could very easily be mistaken for a batboy, except that most batboys could easily outhit him.


"And were considerably more mature in the bargain."

No, the Pittsburgh Pirates mention wasn't an error on my part; the author screwed it up and the editor never caught the error. The card above the written passage clearly shows the name "Angels" on it. Talk about your egregious errors...

And while I'm on the topic...he may not have been a batter who could hit for average, but Rodriguez sure could throw from third to first in a big hurry. Some players have said he'd play with them by waiting to throw and still getting them out easily.

Since that's long been one of my favorite hobby books, here's a link to pick it up on Amazon. It can sometimes be picked up used for a great bargain. I've written a review of this book and will share it on this blog eventually. If you don't have it yet, do yourself a favor...click the link below and get a copy. You'll thank me later.