Here's a card that has a great story: 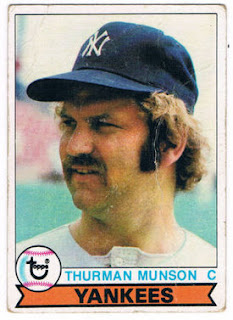 While it looks pretty beat up, it's a very special card in my collection.

1979 was my first year of collecting baseball cards. I was six then, but still remember opening those packs as clear as day. I had also become a Yankee fan when they won the previous year's World Series. So, as I opened wax packs that year I had a routine: I would rip open the wax...since the cards were packaged with a scratch-off game card I split the stack at the insert card and flipped one side over so all were facing teh same way. I then quickly looked through the cards for an orange banner at the bottom. Any Yankees went to the top of the stack. That sometimes meant getting annoyed that the Padres also used an orange banner, but getting a Yankee card was the best feeling. Once I sorted through the cards, the wrapper and gum were tossed into the trash.

Every summer, we'd go visit with Mom's family in upstate New York.  During the summer of '79, we went up there and discovered that Grandma had gotten cable. Not just cable, but WPIX out of New York City...Channel 11, the television home of the Yankees! For the first time, I got to watch the games and hear Phil Rizzuto yell "Holy Cow!" whenever a great play was made.

I also ended up playing baseball in the evenings with some of the local kids in a field behind my Aunt Mary's place. One day the game was broken up when my cousin Lori came out the back porch crying that Thurman Muson was dead. The game broke up immediately and we all went home to see what had happened.

As I learned about the crash and dealt with the news that he was gone (and at 6 it may have been the first time I actually understood that). I also began looking through my baseball cards (they came up with me in a shoebox) to see if I had Munson's card. Since the cards were sorted by team (each one neatly bound with a rubber band), I pulled out the Yankees (on top, as always) and went through them. Reggie, Piniella, Dent, Gossage, even Ken Clay and Gary Thomason!  But no Thurman to be found.

Of course, my older cousin Jimmy had one. He began to hammer me about it. He had the card and I didn't. It was going to be worth "a hunderd bucks" and he had it. Since Jimmy was much bigger and stronger than me, I just sat down and felt sorry for myself as he continually taunted me about it.

A couple days later, I went down to the store on the corner -- a small store owned by an older couple -- and bought a pack of cards. I gave Mr. Forney my quarter and walked back to where we were staying. I tore open the wrapper,  took out the cards, tossed the wrapper -- gum still inside -- in the garbage can and walked up the road. As always, I oriented the stack of cards so the game piece that came in each pack was on the top. Then I went looking for any orange banners.

Somewhere in that stack was this Munson card. It was poignant, because I realized the man in the picture was no longer alive, yet there he was on a piece of cardboard. It may not look like much, but I'll likely own the card until the day I can shake hands with Thurman himself.
Posted by Chris Stufflestreet at 8:30 AM